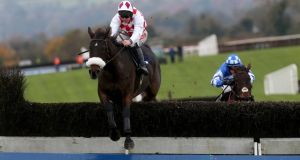 He sported a new noseband and his reception in the winner’s enclosure was more polite than raucous, but it was very much business as usual for Flemenstar as he landed yesterday’s Fortria Chase at Navan for the second year running.

Since routing Big Zeb in 2012 a lot has changed for the star jumper, with owner Stephen Curran removing him from former trainer Peter Casey in an attempt to rehabilitate a reputation that was knocked after three successive defeats last season.

One wind operation later, and a move across Meath to new trainer Tony Martin, Flemenstar started a 1 to 4 favourite to do what on paper should have been routine, but ultimately provoked as many questions as answers.

The eight-year-old’s jumping was not as slick as it can be and at one stage, looking like he would trot up, Flemenstar found himself having to dig in after the last with Days Hotel closing to just over a length.

Bookmaker reaction was to leave the horse unchanged for Cheltenham’s Ryanair (7 to 1) and Gold Cup (20 to 1) while Martin had the air of a man still getting to know a horse who’s been with him for less than a couple of months.

“I’m happy it’s out of the way,” he said afterwards. “He was a bit extravagant at a few down the back but maybe that was freshness at the start of a year. Like you, I’m a bit in the dark and finding my feet and there’s no point making plans for a few weeks until we see how he is. I’ve no idea where he might go next but he’s entered in everything.”

Jockey Andrew Lynch reported: “He was a bit like that this time last year. His first run back is always a bit ring rusty. And he picked up after the last.”

Flemenstar secured a Grade Two double for Martin who’d earlier landed the Lismullen Hurdle with Dedigout, and completed a treble on the day with the handicap scorer Spacious Sky.

Davy Russell switched to Dedigout after Gigginstown Stud’s first string, Rule The World, was taken out with a leg injury and patiently allowed Mala Beach to take over the initiative in the straight before pouncing decisively on the run in.

“He was very good the first day he jumped fences but then he lost his confidence,” said Martin.

Mud lark
He added: “We’ve done plenty with him but I don’t know what we’ll do now. That’s his ground. Almost bottomless is what he needs.”

Jockey Eddie O’Connell was also in double form, guiding Gerdago to success in the three-year-old hurdle and getting Tom Cooper’s The Shepherd King home in the Beginners’ Chase.

Cooper’s son Bryan was on the favourite, Some Tikket, in the chase and he was disputing with The Shepherd King at the last when crashing out.

Gerdago won the race that subsequent Triumph Hurdle winner Out Conor landed in 2012, but it is Cheltenham’s Fred Winter Hurdle that trainer Ken Condon is pondering.

“He was a bit leery in front, and would like a lead, but Eddie did the right thing because his main attribute is staying,” Condon said. “On the flat he lacks a gear and tactical speed but he does jump very well.”