Fehily must honour commitment to Zarkandar at Cheltenham

Maguire to miss Festival meeting for second year in succession 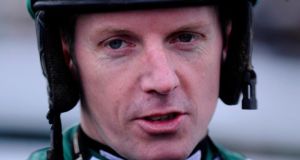 A difficult choice, but Noel Fehily is contracted to ride Zarkandar so must give up his chance on his ‘favourite’ Rock On Ruby. Photograph: Alan Crowhurst

Noel Fehily has confirmed that his Ladbrokes World Hurdle ride will be Zarkandar rather than Rock On Ruby, the horse he has won a Champion Hurdle on. Fehily is contracted to ride for Zarkandar’s owner, Chris Giles, and while that means he is on the Gold Cup favourite Silviniaco Conti, he has to give up the mount on his favourite horse.

Speaking to Betfred TV, Fehily said: “I will be riding Zarkandar, I’m contracted to the owners.

“Obviously it’s something I hoped wouldn’t happen, that the two wouldn’t clash, but they are going to clash and I’m having to ride Zarkandar because of my commitment to the owners.

“It’s not a bad dilemma to be in, they are two very good horses; hopefully Zarkandar can go and win.

“They have the same rating, they’ve raced four times and it’s two each. There’s nothing between them.”

Jockey Jason Maguire has lost an appeal against the 14-day ban he picked up at Ludlow last week, which rules him out of the Festival.

It will be the second year in succession Maguire has missed Cheltenham after being seriously injured on the Monday before the meeting last year.

The Grand National-winning rider finished seventh aboard the Ben Pauling-trained Born To Succeed in the Onny Maiden Hurdle, which was won by 20-1 shot King Alfonso.

Maguire’s ride was beaten 24 lengths, but the local stewards found him guilty of “schooling/conditioning the horse on the racecourse”. The jockey is due to be sidelined between March 4th-17th, but did have his deposit returned.

Owner Barry Connell is still “actively considering” whether to stump up £27,500 (€37,850) to supplement Foxrock for the Gold Cup. The Ted Walsh-trained seven-year-old has progressed out of handicaps to beat all bar Carlingford Lough in the Hennessy Gold Cup at Leopardstown earlier this month.

Quoted around the 12-1 mark, Foxrock would be far from making up the numbers in the feature race of the season.

“The Gold Cup option is still open,” said Connell. “We don’t have to supplement him until the Saturday before, March 7th.

“We are still actively considering it and at this stage it is still a possibility. I don’t think we’ll make the final call until we have to, if I’m honest, we’ll just see how he is.”

Noel Meade, meanwhile, is fearful of Silviniaco Conti when Road To Riches goes for gold. The Co Meath handler has one of the main contenders after the eight-year-old added to his Grade One gains at Down Royal in November with a cool success in the Lexus Chase at Leopardstown over Christmas.

But Meade is especially wary of Paul Nicholls’ ante-post favourite, who looked exceptional this year. Meade said: “I think Silviniaco Conti is the one they have to beat as he has the best form in the race.

“If he can produce his King George run in Cheltenham, there’s every reason to believe he’s going to be very hard to beat. I don’t think there’s much between the Irish horses in the race.”