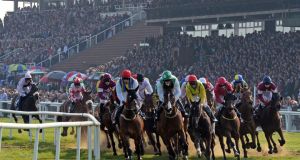 The showcase race at the Easter Festival is the Boylesports Irish Grand National, which this year has an increased prize pot of €275,000

This year’s Easter Festival at Fairyhouse Racecourse returns to being a three-day affair and the organisers are keeping their fingers crossed that the weather will oblige and draw large crowds to the Meath venue for races with a combined record purse of €1.1 million.

“We’re just hoping for some good weather over the weekend, which will help bring the crowds out,” said Peter Roe, Fairyhouse’s manager.

Mr Roe is expecting 27,000 punters will pass through its gates for this year’s festival and place €3.2 million in bets with bookmakers and the Tote. In total, the festival is expected to be worth €4 million to the local economy.

The showcase race is the Boylesports Irish Grand National, which this year has an increased prize pot of €275,000 and is expected to attract a bumper crowd of 16,000 on April 6th.

Irish airline Ryanair, whose chief executive Michael O’Leary is one of the biggest race-horse owners in the country, has also come on board to sponsor the Gold Cup novice chase, improving prize money for the race by 10 per cent to €100,000.

Other sponsors include Choice Hotels, Keelings and Tattersalls.

Mr Roe said the recovery in the economy is beginning to filter through to the track after a number of tough years in the recession.

Corporate bookings are up 10 per cent year-on-year while its catering concessions are up 6-7 per cent. “All the indicators are heading in the right direction,” he said.

Fairyhouse hosts 20 fixtures a year, attracting about 60,000 spectators to the Co Meath venue and generating €14.5 million for the local economy.