Douvan ruled out for the rest of the season

Willie Mullins explainst that the horse has been ‘intermittently lame’ 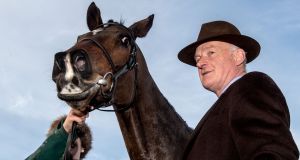 National Hunt racing’s top-rated performer, Douvan, has been ruled out of action for the rest of the season.

His trainer Willie Mullins confirmed on Sunday night that the six-time Grade One winner, who hasn’t raced since suffering a stress fracture to his pelvis at Cheltenham last March, won’t be seen in action until next season.

Douvan had been ruled out of last weekend’s Tingle Creek Chase at Sandown when failing to please Mullins on the morning of declaration day.

Instead his return to action had then been pencilled in for Leopardstown on the second day of next week’s Christmas festival. However, Mullins has pulled the plug on the entire campaign for a horse he has described as the best he’s ever had through his hands.

”I haven’t been happy with Douvan over the past few days. He appeared to have recovered from the problem that ruled him out of the Tingle Creek but has been intermittently lame since we started doing more with him during the week,” Mullins said.

”I have spoken to his owner, Rich Ricci, and because of the calibre of horse Douvan is we’ve decided to take a conservative approach and consequently he won’t be running this season,” he told the Racing Post organisation for which he is a columnist.

Douvan’s seventh in last season’s Queen Mother Champion Chase is the only time he has been beaten in 14 starts for Mullins. Despite that he was a top-rated 174 in the Anglo-Irish classifications last summer.

Min, another Mullins trained star owned by Ricci, was cut to 3-1 for this March’s two-mile crown at Cheltenham for which Altior, who has yet to appear this term, remains an 11-8 favourite in some lists.

Douvan was acclaimed by the Irish champion trainer as the best he’d ever trained at the end of superb novice hurdle campaign in 2015, during which he landed the Supreme Novices Hurdle at Cheltenham.

A year later he emerged unbeaten from a novice chase season which saw him win at the Cheltenham, Aintree and Punchestown festivals.

On five occasions he had Sizing John behind him in second, a horse that last season was extended out in trip to avoid Douvan and wound up winning an unprecedented hat-trick of Gold Cups, earning the 2017 ‘Horse of the Year’ title in the process.