Davy Russell could return on Windsor Park at Punchestown 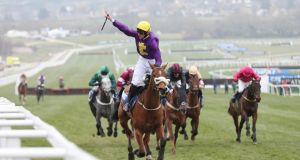 Hopes are high Davy Russell will recover quickly enough from a broken arm to ride in the Punchestown festival at the end of next month and the former champion could have the mount on his Cheltenham Festival winner Windsor Park to look forward to.

A tumultuous weekend for Russell began on Saturday when he revealed he has been sacked by trainer Jim Culloty from riding his 2014 Cheltenham Gold Cup winner Lord Windermere.

Culloty was apparently unhappy with the ride the horse got from Russell when defending his “blue-riband” title at the festival.

Lord Windermere was pulled up in the Gold Cup after racing in last place for the much of the race and afterwards Culloty reportedly told Russell he will not be riding for him again.

The jockey’s Saturday got worse when a fall at Gowran left him with a broken arm. After an intended operation yesterday, the Turf Club medical officer, Dr Adrian McGoldrick, said a return to action for the season finale at Punchestown is a realistic target for Russell.

“He’s broken his left ulna which is the smaller bone in his arm,” he said.

“He will probably be off for about six weeks so should be back for Punchestown.”

That festival is a possible option for Windsor Park’s next outing and significantly Dermot Weld insists if the Neptune hero lines up at Punchestown, and if Russell is available to ride him, then the Cheltenham partnership will be maintained.

“No decision has been taken on where the horse will appear next. There are two possibilities: he could run in one of the two Grade One novice events at Punchestown, in which case Davy Russell will ride if he is available, or there’s every possibility he could run in a conditions race on the flat. A decision will be taken closer to the time,” said Weld.

“I was glad to see Davy Russell’s horrendous fall at Gowran isn’t as bad as first feared and thank God his leg isn’t broken. There seems to be every possibility he will make Punchestown,” Weld added.

“Should that be the case, and should Windsor Park run at Punchestown, then Davy Russell will most definitely be riding him.”

That indicates Russell’s link with Lambe is intact despite Culloty’s decision to dispense with the rider’s services, a tonic for the former dual-champion jockey who rallied from losing his job as Gigginstown’s number one rider at the end of 2013, to maintain his place among Ireland’s elite.

Russell is currently in fourth place in the Irish jockeys table for this season with 51 winners.

Over the weekend, the jockey reported: “After the Gold Cup Jim told me he didn’t want me riding his horses. He wasn’t happy with the ride I gave the horse and he said he wanted a change.

“It’s very disappointing to lose the ride on Lord Windermere. I’ll never forget last year’s Gold Cup win on the horse which was one of the highlights of my career.”

Weld’s Stuccodor is a 20-1 shot for the Doncaster race but is also among the entries for the Tote Irish Lincolnshire the following day.

“Stuccodor loves the soft so a lot will depend on the weather outlook as to where he goes.

“If it looked like turning up very soft in England he could go there, but at the moment it looks marginally more likely he will run at the Curragh,” the trainer said.

“He is in very good form and Pat Smullen was very pleased with him when he rode the horse in a piece of work on Saturday.”