Gigginstown Stud’s number one jockey is spoiled for choice when it comes to talented rides, but make a mistake and the racing public are unforgiving 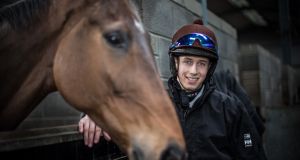 Under the microscope: Jockey Bryan Cooper can expect his every move with the Michael O’Leary-owned Gigginstown Stud team at Cheltenham to be closely monitored. Photograph: Cathal Noonan/INPHO

It is more than two years since Bryan Cooper was appointed number one jockey to Michael O’Leary’s Gigginstown Stud team. Since then, along with a string of horses most other riders would kill to ride, Cooper has learned it is a job that comes with a microscope, one that focuses most intently during Cheltenham.

The public are fascinated with the Ryanair boss anyway. But it is trivial compared to the inevitable focus that comes with doing the steering on his horses when they are among the principal Irish festival hopes. The Gold Cup choice of Don Cossack or Don Poli is an enviable one, but there’s no choice at all in terms of slipping under the radar if getting it wrong.

The job’s yin yang nature was rarely more apparent than during last year’s festival which saw Cooper collect an RSA victory on Don Poli, but also flak for defeats on No More Heroes in the Albert Bartlett Hurdle and Don Cossack in the Ryanair Chase. He wound up finishing the festival with 15 days’ worth of bans for his use of the whip too.

“Riding these type of horses in the better races means people take more notice, which means I’m open to more criticism. It’s just the way it is: riding in the better races means being more open to being seen to make mistakes. And being only 23, people have more of a go than they would, say, at Ruby [Walsh] because he has 10 or 15 years more experience than me,” Cooper says.

“Don Cossack wasn’t my finest hour, I admit, but he had made a bad mistake at the final ditch, which meant we went from being in the best position to the worst. I got shuffled back and then got into a barraging match.

“The best thing about Gordon and Gigginstown though is they stood by me. When you’re riding 20-odd horses in four days, it’s not all going to be plain sailing. There will be blips.

“I got stopped on No More Heroes, simple as that. I can’t say I would have won. I went for the rail because it was my best chance of winning. But it was slow motion stuff. We were going up and down on the spot. On the flat it happens every day of the week, but because it was Cheltenham it turned into a big thing.

“Joseph O’Brien got slated left, right and centre for a few things he did, but we’re only human and we make mistakes. What’s important is improving for them. And I came out of last year with an RSA winner too, and finished third in the Gold Cup, so it was hardly all that bad. It was a lot better than the year before,” he says.

It was in 2014 that Cooper found out what a bad festival really feels like, sustaining a horrific fall which left him with a leg break the Turf Club doctor described as the worst he’d ever seen. Briefly there was speculation the Tralee-born rider’s career in the saddle might be over.

“That got overplayed. It was a bad break but the tabloids blew it up. All it needed was time. There was never any doubt about getting back in the saddle,” Cooper says.

“Michael has spent a lot of money on the game and it isn’t just to see somebody mess up. He always says airplanes are his job and horses are his hobby. But this is a serious job. If it’s not the biggest job in racing, it’s the second biggest. They [Michael O’Leary and his brother, Eddie] employ someone to give them success. We’ve had a few bad days together, but there have been a lot more good days,” he says.

Gigginstown’s rise has been a feature of National Hunt racing in the decade since War Of Attrition sealed O’Leary’s love affair with the sport by winning the Gold Cup in 2006.

This season has already seen the maroon colours carried to success in seven Grade 1 races. Cooper has been on board for all but one, the exception being Prince Of Scars at Leopardstown over Christmas.

His predecessor in the job, Davy Russell, came in for the winning ‘spare’ on that occasion as Cooper picked incorrectly. It’s a hazard of the job.

Cooper has already referenced Ruby Walsh’s famous Gold Cup dilemma with Kauto Star and Denman in 2008, remembering being a kid at home marvelling at a jockey having such a choice. Eight years later, Walsh has another between Vautour and Djakadam, and so does his young rival.

“I’ve always thought he was very good. That’s why I was keen to run him in last year’s Deloitte just after winning a maiden. It didn’t happen for him then, but fair play to Henry [de Bromhead] he’s got him back and the horse has really improved this season. He’s a real two-miler, he’s had a break since Christmas and I’m very hopeful of him,” says his rider.

He’s just one of many Cooper can focus on next week.