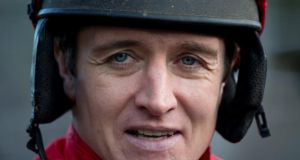 Barry Geraghty will miss the Grand National after he fractured his tibia in a fall at Downpatrick. Photograph: PA

Barry Geraghty will miss the ride on leading Crabbie’s Grand National candidate The Druids Nephew after suffering a hairline fracture to his left tibia in a fall at Downpatrick on Sunday.

Geraghty will also miss Fairyhouse but hopes to be back in the saddle for the Punchestown Festival.

The leading jockey was riding Sailors Warn for Edward O’Grady in the Visit toals.co.uk Rated Hurdle and still held every chance when he fell at the second last.

While Geraghty did not take up his ride in the following race, his injury was not thought to be serious, with the rider believing he had only bruised his shin.

However, later in the afternoon Geraghty went to hospital in Blanchardstown, Dublin, for an X-ray which confirmed the bad news.

“I’ve just left him, his leg is in plaster and he’s gone home.

“He’ll see a specialist on Tuesday and then he’ll have an idea about how long he’ll be out but I would imagine it will be between four to eight weeks.”

Elsewhere The Irish Turf Club has moved the date of the Foxrock inquiry from April 2 to April 18.

Trainer Ted Walsh and jockey Adrian Heskin attracted the attention of the stewards when Foxrock finished third at Punchestown in December, with officials accepting the seven-year-old had finished slightly lame and lost both front shoes during the course of the race, although they banned Heskin for not reporting the issues in the first instance.

However, new footage has emerged that was not available on the day, prompting the inquiry to be reopened.

Turf Club press officer Cliff Noone said: “Their legal team couldn’t make the original date (April 2) so it has been put back to April 18.”