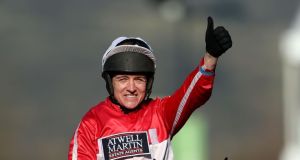 Barry Geraghty could make a surprise return for the final day of the British jump season at Sandown. Photograph: PA

Barry Geraghty has not yet given up hope of making a surprise return from injury for the last day of the British jumps season at Sandown on Saturday.

The Irishman, retained by Nicky Henderson in the UK, rates his prospects as “small” but is more hopeful of being back in action for the Punchestown Festival next week.

He reports his leg to be healing extremely well after he sustained a hairline fracture of his tibia in a fall at Downpatrick on March 22 and expects to be back on a horse by the weekend.

“It’s coming along well. I was just with my surgeon this morning and he’s happy with how it is and he’s going to see me towards the weekend and take a view then,” Geraghty told At The Races.

“I’d be very hopeful of making Punchestown next week.

“It’s healed well so far anyway and hopefully it will stand the test when it comes to it.

“It’s been good. I’ve had lots of acupuncture and homeopathy. I’ve been working hard on it so I’ve been doing everything I can do.

“I’ve been on the go the whole time. I’ve not put on much weight, I’m keeping relatively fit and I’ll get back in the saddle this week and get busy before the weekend and see how we go.

“There could be a small chance I’d make Sandown on Saturday but that’s all.”

Among Henderson’s entries at Sandown are Bobs Worth in the bet365 Gold Cup and Sprinter Sacre in the bet365 AP McCoy Celebration Chase.