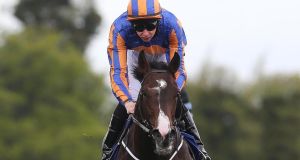 Battle Of Marengo wins the Derrinstown Stakes at Leopardstown and is being aimed at the King Edward VII Stakes at Royal Ascot next week.

With Ruler Of The World appearing to be the Ballydoyle mainstay for the Dubai Duty Free Irish Derby later in the month, there could be even extra depth to Aidan O’Brien’s Royal Ascot next week where he will aim to be leading trainer at the world-famous meeting for a fifth time.

Current indications are that Ruler Of The World will be O’Brien’s sole representative at the Curragh which looks to free up other three-year-old middle-distance talent for Ascot, with Battle Of Marengo earmarked for the King Edward VII Stakes, Leading Light heading for the Queens Vase and Mars being targeted at the Tercentenary Stakes.

They join a hugely-powerful prospective raiding party that also includes the older stars Camelot (Prince Of Wales’s Stakes) and Declaration Of War (Queen Anne Stakes) as well as a two-year-old squad headed by the Listed winners Stubbs and Coach House.

O’Brien first won the coveted leading trainer award at Royal Ascot in 2001 with four winners, also his tally when landing the prize in 2007 and 2011. His vintage year came in 2008 though when Ireland’s champion trainer saddled half-a-dozen winners, including four at Group One level. His overall tally at the meeting stands at 37.

Before Ascot, however, O’Brien’s Group One sights look like switching to France this Sunday when Just Pretending, third to Just The Judge in the Irish 1,000 Guineas, was one of 19 entries left in the €1 million Prix de Diane, the French Oaks, at Chantilly, after yesterday’s forfeit stage.

If Just Pretending is to win she will have to produce a career best against top-quality home opposition that includes the French Guineas heroine Flotilla and the Prix Saint-Alary winner Silasol. Richard Hannon has also left in the Newmarket 1,000 Guineas winner Sky Lantern who holds an entry in next week’s Coronation Stakes too.

Co Clare trainer Declan McNamara has different big-race priorities with his star hunter Mossey Joe who swept past big name opposition to win at Startford last week and who could now be aimed at the Galway Plate.

The Summer Plate at Market Rasen is also a pre-Galway option despite concerns about his liking for travel.

“If he bounces back, the Galway Plate would be a possibility, or we might go for the Summer Plate. The original plan was for him to be ready to run back towards the end of July so hopefully that plan will still work out. He’s definitely a good ground horse so we’d be hoping he might pick up another race before the ground turns heavy,” said McNamara.