Wimbledon’s ‘issues’ down to seeding, shouting and show-boating 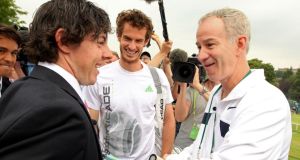 Since problems are eternal they are also, by definition, relative: kinda like the smart-arse one in Friends “sympathising” with the wet one’s complicated love-life – “Oh no, two women love me. They’re both gorgeous and sexy. My wallet’s too small for my 50s. And my diamond shoes are too tight!” So any problems tennis has ahead of the next fortnight at Wimbledon are really pretty much small beer. Basically, they come down to seeding, shouting and show-boating.

A sweat has been raised about Rafa Nadal’s fifth seeding in the men’s tournament behind David Ferrer. And it is true Ferrer isn’t remotely close to his compatriot in terms of accomplishment.

It is also true the Wimbledon authorities have a certain discretion in seeding due to the tournament being on grass. But only a certain amount, under a system agreed with the players, and anyway, it’s not like playing on grass is so different from playing on a hard court these days.

The era of one-dimensional, wham-bam serve merchants making the final are long gone. So Nadal is likely to play Roger Federer in the quarters: ooh, how awful.

Then there’s the shouting which, especially when Sharapova meets Azarenka, can hit almost pornographic levels.

And as with any adult activity, if both parties are enthusiastically reaching for the sonic skies, then good for them. But it was Martina Navratilova who pointed out that if a player can’t detect the sound made from a ball striking the strings, because an opponent is screeching like a banshee, then that automatically puts them at a disadvantage. And that’s not on.

Sound-meter
So put a sound-meter on either side of the net and if the roof starts to come off, the umpire can dock the shouter a point. See how fast they shut up then.

And then there’s that tiresome rubbish the Latvian attention-seeker Ernests Gulbis came out with at the French Open about the top players being too polite, and not indulging in more boxing-type histrionics to make the game more entertaining to Joe Public.

John McEnroe backed him up, hardly surprising from someone so combustible, yet simultaneously cold-eyed enough to coincide those notorious rants with his own strategic interests. To which, one can only say, if you need a panto in order to watch tennis, then go to the theatre.

We continue to be in a golden age of the game right now. And there is a boxing element to it, just not the clapped-out, cartoon stuff that Gulbis & Co seem to think the public can’t see through.

Tennis doesn’t have boxing’s physical violence, but the mental violence is always present. If you can’t appreciate that, or you need a buffoon shouting in order to watch, then switch channels. There’s no shortage of buffoonery elsewhere.

All of which doesn’t mean the corporate sheen that’s now attached to all top-flight global sport isn’t present in tennis too. It just doesn’t require second-rate play-acting to take the place of the common civility the top players in the male game manage to show one another.

That things get a bit more sparky among the females is a curio of gender politics ripe for simplistic caricature – and no way am I falling for that,

All of it, though, is evidence of the relative triviality that presents itself as a problem for today’s superstar players.

And cocooned as they often are in a droning, take-each-point-as-it-comes, focus-on-every-match, bubble of self-absorption, it is interesting to ponder, on the 40th anniversary of a truly seismic Wimbledon, whether the political spirit which fundamentally changed the game back in 1973 can still be present.

Volatile political time
Of course the needs that resulted in a tennis players associations for both men and women have long been addressed. And 1973 was a much more volatile political time. But it’s worth remembering how Billie Jean King diverted enough time from being the world’s number one player to setting up the Women’s Tennis Association by the simple ploy of locking most of her rivals into a room and not letting anyone out until convincing them everyone’s individual interests were best served by sticking together.

For a change most of the men were just as impressive. The recently formed ATP was faced with a fundamental challenge when one of its members, Nikola Pilic, was suspended by the Yugoslav federation in a blatantly arbitrary decision that became a huge peeing competition between players and officialdom. Pilic ended up with a one-month suspension that involved missing Wimbledon. It was make-or-break stuff for the newly organised players. And they didn’t blink. Or at least most of them didn’t.

Seventy-nine boycotted the tournament, including 13 of the 16 seeds, including defending champion Stan Smith. His place at the top of the seeds was taken by Ilie Nastase, that monument to gurning which Centre Court types indulge, to the bemusement of the rest of the world.

And it is worth remembering how Nastase was joined by Jimmy Connors, another of the “characters” of fond memory: good ole’ spitting, scratching, effing-and-blinding Jimbo, who originally declined the chance to join the ATP. Bjorn Borg played too. Both made the quarter-finals in a year when the comparatively mundane talents of Jan Kodes won out.

A timely reminder to Gulbis & Co that show and substance can be very different things.