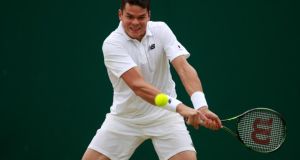 Canada’s Milos Raonic: A win over Sam Querrey would put him in a head-to-head with either Roger Federer or Marin Cilic for a place in Sunday’s final. Photograph: Adam Pretty/Getty Images

Milos Raonic is hoping his first Wimbledon title will come to him with the help of three-time winner John McEnroe. The commentator and seven-time Grand Slam champion has been in the Canadian’s corner since the Queens tournament as a consultant.

But McEnroe shuttles between his commitments to television and the practice courts.

Known for his deft touch and exceptional volleying as a player, McEnroe spent 170 weeks as the world number one, while the 6’5’’ Montenegro born Raonic is adjusting everything to win his first major. “I think he’s just enforcing things,” says Raonic of McEnroe. “He’s probably talking to me more about my attitude on court in a different way than the other guys I have around me. He’s telling me to go out there and impose myself more, make sure the other guy knows you’re there.”

Raonic has posted the fastest serve so far at 143 mph and with 101 aces has hit more than any remaining player, while Querrey is second with 97 aces. The contrast with confused Australian Nick Kyrgios is striking. Raonic has three coaches, while Kyrgios has none claiming a certain freedom because of it.

“We both feel we have very different needs,” said Raonic. “The way I’ve always looked at it is, don’t spare any expense when it comes to improving. Maybe some other guys look at it a different way. I have three coaches here around me. I have numerous physios. I have a fitness guy. I have numerous people that either come to tournaments or are taking care of me behind the scenes. I feel that’s what I need.”

Andy Murray, who faces Jo Wilfred Tsonga would be in the Raonic camp, although Federer, went for long spells without a coach in his team. For grass and also the US Open, where McEnroe won four times between 1979-84, he seems the classic fit.