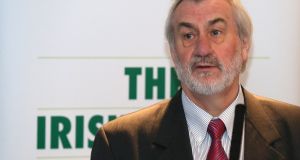 Details are beginning to emerge of some of the issues that have led Billy Walsh to leave Irish boxing and move to America to take over their female Olympic boxing programme. At a Dáil Committee to sign off on Kieran Mulvey’s appointment as chairman of Sport Ireland, Mulvey revealed that one of the demands from the Irish Amateur Boxing Association was that Walsh get permission from his CEO before engaging with the media.

“In this proposed contract, Billy Walsh was told that he could not engage with the Olympic Council of Ireland, the Irish Sports Council or the media without the written permission of the CEO. Imagine Joe Schmidt being told he had to contact Philip Browne every time he wanted to announce a team. This is unconscionable.

“What was Billy Walsh looking for? I think he was looking for respect. And my god did he deserve it. The second thing he was looking for was authority. Reasonable authority to run the High performance programme without petty bureaucratic interference. I mean, how can you have a situation in Doha where a boxer could win a medal then Billy having to turn to Des Cahill and say, ‘Sorry, I can’t give an interview, I have to get written permission.’

“That exposes a mentality to me. From what I know and understand what was going on, it was constantly to chip away at whatever authority Billy had achieved - and it wasn’t enormous. There was also a feeling sometimes that I get from meeting the IABA that there’s a resentment of the High Performance Unit and of the resources that go into it.”

Mulvey was appearing in front of the Committee on Transport and Communications the morning after going on Prime Time to call on the IABA to find a solution to the farrago within 24 hours or risk a funding review. The IABA were understood to be holding an emergency meeting of the board on Wednesday morning.

“The IABA for all practical purposes is almost totally funded by the state. It is not my intention and it will never be the intention of the board to go hurt the athletes, the boxers, the coaches. All of them can get a guarantee from me here this morning that they will not be touched. They will be the best financial support that we can do. My concern is that portion of the grant that is given to the IABA for central headquarter administration.

“I am putting that marker down now and I hope I will be supported on this. We will review that for the 2016 funding round until we are assured that everything that is required on transparency and corporate governance is to our satisfaction. It’s not today or yesterday that this arose. It’s not working properly and it needs to be fixed.

“The IABA didn’t hear anything from me last night that they haven’t heard me say across the table to them. They allowed this to drift. They said they were in negotiations and then legal people from both sides got involved. I just know for a fact that anybody who has dealt with the IABA in these negotiations, be they human resource consultants or legal, have found it the most frustrating experience they’ve ever experienced. And it mirrors my own.

“Do they want him or do they not? And it appears to me that they don’t. To allow this poker game to go to the ultimate. The president of the IABA told the minister for sport last weekend that this would be sorted out, it would be alright, that it would be done. And what do we find on Monday morning? It’s not done. It was nothing to do with financials, that was all thrashed out and paid for by the Sports Council. It was all the other indignities that were added.”

1 St Michael’s conveyor belt showing no signs of slowing down
2 Pitchfork pundit Joe Brolly taking the subscription TV dollar? Say it ain’t so!
3 Welcome to Iten in Kenya – home of champions and cheats
4 Leinster lead the Irish charge on defining weekend for provinces
5 Munster mood will be determined before kick-off
Real news has value SUBSCRIBE