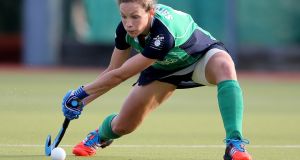 It took the weather to finally put Hermes’ Hockey League winning streak on pause after their game away to UCC was postponed on Saturday, but their closest rivals struggled to make headway in their absence, Railway Union held to a scoreless draw by Pembroke Wanderers and Ulster Elks beaten at home by Pegasus.

After losing their opening four games, Pegasus rallied to win three in a row, but Railway put an end to that run last weekend with a 1-0 win. On Saturday, though, Pegasus climbed back up to joint fifth with an impressive victory over an Elks side that has been Ulster’s main Hockey League force so far this season.

Suzanne Ferris gave Pegasus a first quarter lead, one they held until the final quarter when Gemma Frazer equalised for Elks. Three minutes later, though, Vanessa Surgenor got the winning goal from a short corner, enough to bring Pegasus right back in to the race for a place in the semi-finals.

Cork Harlequins are contenders too after their 7-0 win over Greenfields, with Cliodhna Sargent scoring four, lifted them up to third, while a double from Deirdre Duke yesterday helped UCD to a 3-1 defeat of Ards, a result that puts them level on points with Pegasus and Pembroke.