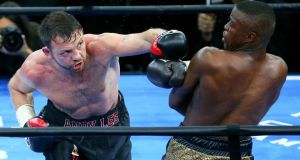 Andy Lee’s WBO World Middleweight title fight against Billy Joe Saunders has been moved from Thomond Park to Manchester after a statement released by joint promoters Adam Booth and Frank Warren on Wednesday night confirmed that the Limerick fighter was suffering from a virus.

The fight, which was meant to take place on Saturday September 19th, has been moved back three weeks to October 10th and will form the main attraction of a bill at the 21,000 Manchester Arena.

The promoters were hopeful of selling out the 33,000-capacity Thomond Park for the fight, although they suffered a setback last week after the withdrawal of Olympic champion Katie Taylor from a proposed bout on the undercard .

Booth assured joint promoter Warren that Lee would be fit for the original fight date, but Warren outlined his worries in a statement on Wednesday night.

Warren said: “Adam contacted me and quite correctly let me know that Andy was ill. Whilst they were prepared to gamble on him recovering in time, there is so much at stake for so many people, common sense had to prevail.

“It’s a shame for Andy Lee that his dream of defending his world title in Limerick cannot be fulfilled now, but this being such a big fight neither boxer can risk going into the ring at anything less than 100 per cent.”

Booth added: “Obviously, Andy and I are gutted that this won’t be taking place in Limerick. If the virus had cleared, then maybe it could have. However, after speaking with Frank, my partner in the event, we decided that the risk was just too great on many fronts.”

The promoters confirmed that tickets purchased for the cancelled Limerick show can be returned to the point of sale for a full refund.

Adam Nolan bowed out of the tournament after losing out on a unanimous decision to Belarusian welterweight Pavel Kastramin.

Nolan can still qualify for October’s World Elite Championships and Olympic qualifiers in Qatar if Kastramin reaches Saturday’s 69kg final, as the top six boxers in Samokov – the semi-finalists and quarter-finalists who lose to the eventual finalists – qualify.

Olympic bronze medallist Conlan, a silver medal winner at the 2013 European Elite Championships, got Ireland off to a winning start over Denmark’s Frederik Jensen, taking the unanimous decision 30-27,30-27,30-27.

Walsh followed up with another unanimous decision against Hungarian light-welter Nyeki Georgian, the scoring judges marking it 30-27, 30-27, 29-28.

Ward completed the hat-trick of unanimous decisions when he saw off Mikhail Dauhaliavets of Belarus 30-27, 29-28, 29-28.

The 2011 European Elite champion will now meet Croatian No 1 seed Hrvoje Sep in the light-heavy semi-final on Friday, with Thursday being a rest day at he finals.