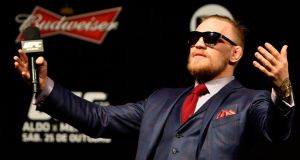 Conor McGregor has been getting plenty of attention in Boston ahead of his fight with Dennis Siver. Photograph: Buda Mendes/Getty Images

An Irish accent goes a long way in Boston’s “Southie” neighbourhood, and it also helps if you are one of the world’s most exciting mixed martial artists.

Conor McGregor found that out Wednesday when crowds of locals huddled outside the Peter Welch Gym after word got out that the Irishman was inside. It looks like the rest of Boston is also eager to see McGregor, with the 19,000 seater TD Garden nearly sold out for his Ultimate Fighting Championship bout with Dennis Siver on Sunday.

Already a star in his homeland, the fight is designed to build the 26-year-old McGregor’s US profile. UFC Chairman Lorenzo Fertitta said the event is strategically scheduled for Sunday night so that it can be advertised heavily to 50 million viewers earlier in the day during the huge Packers-Seahawks NFL game. Both the game and UFC event will be televised on FOX channels in the US.

The UFC have big plans for McGregor, a rare fighter whose swagger generates big interest in and out of the octagon. UFC President Dana White noted that a featherweight title opportunity awaits McGregor if he defeats Siver, and the Dublin native doesn’t plan on disappointing the promoter.

“Siver is a seasoned veteran,” said McGregor of the German-Russian. “He is a kickboxing expert, a taekwondo expert, he is my most experienced competitor. But I feel that it will take me under two minutes to dispatch him.”

Oddsmakers agree, with 1/10 offered on victory for McGregor, whose atypical striking style has proven unsolvable for opponents in his four UFC fights. Still, a strong Irish presence is expected. More than a thousand reportedly made the trip to see McGregor beat Dustin Poirier in Las Vegas last September, and Sunday’s event has the added attraction of Antrim’s Norman Parke and Dubliners Cathal Pendred and Paddy Holohan all facing tough opposition.