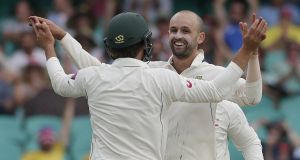 Australia’s spinners Nathan Lyon and Stephen O’Keefe took key wickets between rain showers to peg the West Indies back to 207 for six at the end of a weather-disrupted opening day of the dead rubber third test yesterday.

More than two hours and 45 minutes of play were lost to rain in a stop-start day at the Sydney Cricket Ground, where the tourists fell away after winning the toss and making a solid start.

Denesh Ramdin, unbeaten on 23, and Carlos Brathwaite (35 not out) will resume on day two if the forecast heavy rain stays away.

The hosts had rolled the dice on the twin spin attack at the SCG for the first time in a decade and got their reward when Lyon and O’Keefe got plenty of turn off a straw-coloured wicket.

Off-spinner Lyon (2-68) produced a stunning delivery that pitched wide and turned in to take the bail off Jermaine Blackwood’s off stump for 10 and returned after the second rain break to remove dangerman Kraigg Brathwaite for 85.

Trailing 2-0 in the three-match series after thumping defeats in Hobart and Melbourne, the West Indies had started the day by building on their improved batting performance in the second test.

After the early loss of opener Shai Hope (nine), Kraigg Brathwaite and Darren Bravo (33) looked in fine nick as they ushered the tourists to lunch at 92 for one.

Australia’s bowlers emerged from the break re-energised, however, and James Pattinson got the breakthrough when Bravo’s miscued pull sent the ball flying to Usman Khawaja running in from the deep.

That broke a 91-run partnership and brought Marlon Samuels to the crease looking to break his run of eight test innings without getting to the 20-run mark. He failed in farcical fashion looking for a quick single that always looked like a gamble.

French let Mohamed Haouas’ talent outweigh lengthy rap sheet 06:30
Centurion Cian Healy still marching to the beat of his own drum 06:00
Nicky English: Limerick nicely primed to pass Premier test 06:00
Pádraic Joyce: ‘It is massively important this All-Ireland final goes ahead’ 06:00
Huge support for former Wallabies player who has come out as gay 06:00
Here is your handy guide to sport on television this week