Tributes paid to Elena Baltacha after her death from liver cancer 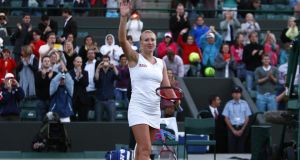 Former British number one Elena Baltacha died of liver cancer at the age of 30 early on Sunday morning, her family have announced. Photograph:Sean Dempsey/PA

Tributes have poured in for the former British women’s number one tennis player Elena Baltacha who has died of liver cancer at the age of 30.

The sports star was hailed as a “great fighter” and a “shining light” after her death at home early yesterday morning was announced.

Baltacha died peacefully surrounded by friends and family and with her husband Nino Severino at her side.

She was diagnosed with the illness in January, just two months after retiring from tennis and only weeks after she married her long-term coach.

Announcing her diagnosis in March, Baltacha vowed to fight the cancer “with everything I have”.

In a statement released by her family, Severino said: “We are heartbroken beyond words at the loss of our beautiful, talented and determined Bally.

“She was an amazing person and she touched so many people with her inspirational spirit, her warmth and her kindness.”

King, the former US world number one player who won 20 titles at Wimbledon, said on Twitter. “Saddened to hear about Elena Baltacha’s passing. My fondest memory with Bally was sharing a wonderful chat when we met the Queen at Wimbledon.”

Navratilova, who also holds 20 Wimbledon titles, and has previously suffered cancer, said: “Elena Baltacha was a great fighter on the tennis court.

“We as tennis players always worry about our bodies, trying to keep injuries at bay.

“But cancer – you can’t prevent that and you can’t rehab it either and no matter how much of a fighter you are, sometimes cancer wins.

“Elena was taken from the world much too soon –fighting to the end and we will miss her.”

Baltacha’s death comes after she was diagnosed at the age of 19 with primary sclerosing cholangitis, a chronic liver condition which affects the immune system.

She managed the condition throughout her career with medication and regular blood tests.

The daughter of former Ipswich, St Mirren and Inverness footballer Sergei, Baltacha was born in Ukraine but raised in Britain.

However, she struggled with injury and illness during her career, and ankle problems eventually forced her to retire.

In 2010 she launched the Elena Baltacha Academy of Tennis, which helps children from all backgrounds to learn and play tennis.

All those involved in running the Academy have pledged to carry on the work that she started, the family statement said.

The previously announced ‘Rally for Bally’– a fundraiser due to be played in June – will now go ahead in her memory.

Her childhood friend Andy Murray had committed to play in the event along with Navratilova and Tim Henman, and the money raised will go to the Elena Baltacha Academy of Tennis and the Royal Marsden Cancer Charity.

Her agent and friend, Eleanor Preston, said the fundraiser next month will be an opportunity to celebrate everything the tennis star achieved.

She told Sky News: “It was part of Bally’s emotional make-up to be very stoic, she never once asked why me or why is this happening. She was incredibly strong and determined and that was who she was.

“She achieved an awful lot and in the context of having a serious liver condition that she struggled with since the age of 19. This is why she should be held up as a role model.

“She went through it all without the slightest bit of self pity or ego.”

Scottish first minister Alex Salmond said: “With Elena Baltacha’s sad loss at the age of 30, Scotland has lost one our most well-loved sports stars.

“Despite suffering from illness since she was a teenager, Elena refused to let this stand in the way of her tennis ambitions and was British number one for three years.

“She was as much a role model for young people off the court as she was a dedicated and superb talent on it.”