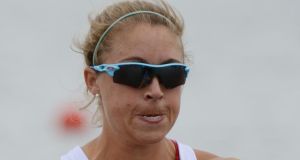 Genevra (Gevvie) Stone, who finished seventh at the Olympic Games in 2012 and ninth at last year’s World Championships, has been training with the Ireland team and will be part of a huge entry on Saturday week (January 24th) at the University of Limerick.

Sanita Puspure, who competed against Stone in the World Championships, later teamed up with her in the Great Eight which crushed the opposition at the Head of the Charles regatta in Stone’s native Boston in October. The connection led to the invitation to Stone to come to Ireland.

Lisa Dilleen, who has been posting impressive times on the ergometer, should relish the chance of another top-class rival in the women’s open category in Limerick.

The championships are a mandatory part of the Ireland trials process and while Puspure is recovering from injury, she, along with a group including Sinéad Jennings, Emma Desmond and Monika Dukarska, will do their testing on the Wattbike. The lightweights will weigh in and all will compete on the same general schedule as those on the ergometer.

Elite lightweights Claire Lambe and Siobhán McCrohan are both entered for the ergometer tests. The one big absentee from the women’s ranks is Helen Hannigan, who has not yet recovered from a leg problem.

The men’s lightweight competition could produce some exceptional times: Paul O’Donovan heads up a strong entry. Niall Kenny and Nathan O’Reilly will do their erg tests in London, where they are based, with independent verification.

At heavyweight men’s level, American-based athletes have been given the leeway to submit ergometer scores at times which suit them. There are a large number of underage entries for the championships. At the other end of the scale, there are three men entered in the over-70 lightweight category – one of these, Richard P Morgan from Cork, is in his mid 80s.