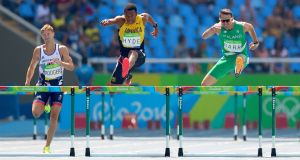 Ireland’s Thomas Barr clears the final hurdle on his way to finishing second in heat four of the men’s 400m hurdles in Rio. Photograph: James Crombie/Inpho

You don’t need a medical degree to know that a hip and then a groin injury aren’t ideal preparation for a near flat-out race of 400 metres, which includes 10 hurdles, each one three-foot high. Especially when it’s your Olympic debut.

Not that this seemed to bother Thomas Barr – who defied his injury-hampered preparations for Rio when sealing an automatic qualifying spot in the Olympic 400m hurdles semi-finals.

In doing so, Barr also ran over a second faster than his season best, clocking a highly impressive 48.93 seconds to finish second behind the Japanese national champion Keisuke Nozawa, who won the heat in 48.62.

Having missed large chunks of the season through injury, first the hip and then the groin, Barr’s confidence wasn’t exactly soaring: he hadn’t even broken 50 seconds, yet secured one of the top-three automatic qualifying spots with ample room to spare.

“I always knew that it would take a sub-49 second run,” he said, “but I just didn’t know if I would have that in me, to be honest. So, to go sub-49 in really my first proper race of the year, where I’m actually race fit and ready to go, is incredible.

“So I’m as much relieved as I am excited and delighted and everything else, just to have gotten through that in such a good time.”

Not that it came easy: Barr had to race hard down the home stretch to hold off Eric Cray of the Philippines, who took third in 49.05, with the experienced Jamaican Jaheel Hyde only managing fourth in 49.24

“Yeah, to be sure, it was a battle, and a little reminiscent of my World University Games win last year, when I was a little in check with the top boys coming off hurdle seven and hurdle eight, and I knew once I kept even pace with them over the last two hurdles and maintained focus then I would nail it, because I felt I still had it, and the finish, in my legs.

“And to finish second, I didn’t think I’d be up that high. I honestly thought I might be standing here, waiting for the other heats to finish, looking at the clock, and see would I make it through as a fastest loser, if anything. So an automatic qualification is exciting, and gives me a great lift, looking forward to tomorrow.”

Those semi-finals are set for Tuesday night’s session (1.35am Wednesday morning Irish), the 24 year-old Waterford athlete drawn in the third of the three semi-finals, and with the near-perfect fourth-lane draw: only the top two, plus the two fastest losers, will make the final, although Barr has avoided many of the big guns, and it’s not an impossible task. He actually ended up 10th fastest qualifier from across the six heats.

Of course there is precedence here in that Ireland’s Bob Tisdall made the final of the 400m hurdles back in 1932, in Los Angeles, where he stunned all the big favourites by running 51.67, to win the gold medal. (That should have been an Olympic and world record too, although back then if you tipped a hurdle, like Tisdall did, times didn’t stand for record purposes.)

“Yeah, and I suppose I’ll have to try to follow in his footsteps, and win a gold medal,” said Barr.

A little earlier, Sara Treacy had to be content with a 17th place finish in the final of women’s 3,000 metres steeplechase – which included 28 barriers, each two and a half feet high, plus seven water jumps: the melting heat inside the Olympic Stadium also added to the task. Ruth Jebet of Bahrain, formerly of Kenya, won the race in 8:59.75, less than a second off the world record of 8:58.81 set by Gulnara Galkina of Russia at the 2008 Beijing Olympics.

“I would have liked more but my legs weren’t playing game today,” said Treacy, who clocked 9:52.70, having originally missed out on a place in the final, only to be later added, having being tripped in her qualifying heat.

“I can’t be disappointed competing in an Olympic final. A lot of athletes would love to be in this position. It’s a fast track and I just wish I could have gotten a little more out of myself. Particularly in the heats.”