The unlikely triumvirate that brought Ali to Croke Park 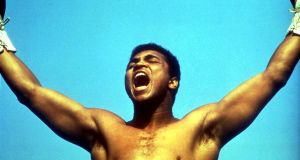 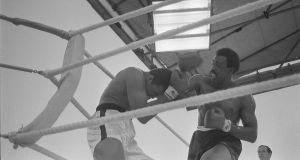 On April 4th, 1972, Harold Conrad arrived in London from New York. Booking into his hotel, he was surprised to discover three urgent messages from some guy by the name of Butty Sugrue. A former sports writer, Conrad had carved out an international reputation as one of the slickest promoters and publicists in the fight game. His curiosity pricked, he picked up the phone, and rang the local number he’d been given. First thing he heard was an almost impenetrable Irish accent launching into an elaborate tale about how he’d once spent time with the great Joe Louis and was now in a position to make Conrad a very rich man.

Always intrigued by that possibility, Conrad took a cab to Shepherd’s Bush where Sugrue and his wife Joan ran The Wellington, a sprawling Irish bar. After the introductions, Sugrue cut to the chase.

“Could you get Muhammad Ali for a fight in Dublin?”

“Against whom?” asked Conrad.

Every city Conrad passed through, there seemed to be a dreamer or a schemer who fancied bringing the greatest show on earth to his homeland. Being polite, he spun Sugrue a line about anything being possible if the money was right, and, thinking he’d call this chancer’s bluff, he mentioned $300,000 as a ballpark figure.

Within minutes, the unlikely duo walked to a nearby branch of Williams & Glyn Bank where, according to Conrad’s recollection, the following dialogue took place.

Freshly invigorated by that ringing endorsement, Sugrue couldn’t resist enhancing his position further, “And there’s plenty more where that came from.”

From Killorglin in Kerry, Michael “Butty” Sugrue was a pocket battleship of five foot five, blessed with extraordinary strength, who had already packed a lot into his 48 years on earth. From hoisting colleagues over his head while working the peat bogs of Offaly as a teen, he managed, in a time before television, to parlay his remarkable fortitude into fame as “Ireland’s Strongest Man” in Duffy’s Circus.

He moved to London in the early sixties where he got into the pub business and evinced a flair for outlandish promotion. One night he might wow customers by lifting Henry Cooper clean off the ground using only his chest, the next he might pack the bar with the (far-fetched) promise that the head from the recently-exploded Nelson’s Pillar was going to be unveiled at a certain point in the evening.

After establishing the bona fides of the self-styled “strongest publican in captivity”, or at least taking the bank official at his word, Conrad did further reconnaissance. For a read on how Ali might play in Ireland, he called Rock Brynner, son of Yul and fairly recent graduate of Trinity College, Dublin. Despite looking and living like a hippie, Brynner was at that point one of Ali’s bodyguards, a bizarre role for a peacenik six inches smaller and 80 lbs lighter than the boxer he was supposed to protect. He loved the idea of Ali visiting the city he once called home.

“I wanted to walk into my old college pub, The Old Stand, with Muhammad Ali,” said Brynner of his great wish that eventually came true. “Of course, the barmen remembered me but still acted very nonchalant when they saw us. They looked at us as if all along they expected Muhammad Ali, the most famous man in the world, to walk into their bar.”

The son of a Hollywood icon, a retired circus strongman and a publicist who inspired Humphrey Bogart’s character in “The Harder They Fall”, this then was the unlikely triumvirate that brought Muhammad Ali to Dublin in the summer of 1972.

More than a year had passed since his defeat by Joe Frazier at Madison Square Garden and the former champion had entered a curious phase in his career. No longer in forced exile. No longer the king. Yet somebody who needed to keep earning to fund his rather lavish lifestyle. Between the Frazier epic and Conrad meeting Sugrue, Ali had fought four times and the purses had gradually decreased from a high of $420,000 against Jimmy Ellis in Houston to a low of just $200,000 for waltzing with Mac Foster at Tokyo’s Budokan Hall.

With Frazier appearing in no hurry to put his title back on the line in a money-spinning rematch, Ali’s manager Herbert Muhammad was willing to accept $200,000 to take the show to Croke Park, especially when Conrad talked up how much the spectacle would mean to the “poor people of Ireland”. Of course, in the end, not enough of the poor people turned up or paid in to make the promotion viable.

While Ali was paid in full, Conrad was left short $6000, and the Williams & Glyn Bank bore the brunt of the financial disaster, the manager who vouched for Sugrue reportedly had a stroke soon after the fight and died. The Kerryman lost around (pounds)20,000 but many who worked the event that week were discretely summoned to his accommodation (a flat on Sean McDermott Street) where he paid their wages in full out of a plastic bag full of cash.

His own pay-off was a footnote in history, the man responsible for Dublin’s place on the most storied resume in all of sport.