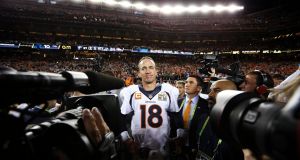 The first paragraph of the story read: “A sweeping lawsuit filed by six former female students against the University of Tennessee last week argues its athletics department has long condoned a ‘hostile sexual environment’ stretching back to the mid-1990s, citing nearly a dozen instances of former student athletes accused of sexual assault — including NFL star Peyton Manning. ”

According to The Tennesseean, the lawsuit was filed by the women, unnamed, because the university created a culture that enabled sexual assault among student-athletes, especially football players. The university also used an adjudication process that they said was unusual and biased against victims who step forward. Three former UT football players and a basketball player were named; one current football player was identified as “John Doe”.

The lawsuit mentioned a 1996 incident in which Manning, then Tennessee’s quarterback, was accused of placing his genitals on the face of a female trainer, Dr Jamie Naughright, while she examined him. Manning denied the accusation, saying he was “mooning a fellow athlete. Manning later described her in a book, Manning: A Father, a Son and His Football Legacy, as being “vulgar mouthed”.

The incident was not investigated by police, and Naughright’s lawsuit against Manning was settled a year later with the agreement that she leave the university. So, while the allegations about Manning have been heard before, the new part of the story is the accusation in the lawsuit is that the University of Tennessee had allowed a hostile environment for women to foster.

What could happen? Other than embarrassing Manning again and possibly making his image less lustrous to potential advertisers and post-retirement employers, there probably won’t be enormous fallout – although the endorsement opportunities for the quarterback, a two-time Super Bowl winner, are measured in the millions of dollars.

Manning is almost assuredly a first-ballot Pro Football Hall of Fame inductee who lived up to his billing as a player after he was a No.1 draft choice in 1998. He threw for 71,940 yards and 539 touchdowns in 266 regular-season games over 17 active seasons and led the Colts and the Broncos to Super Bowl victories. It is unlikely, allegations that have been in the public sphere for some time – and were never investigated by police – will affect his eventual induction into the Hall.

Why is this happening now? Shaun King wrote a column on the New York Daily News’s website at the weekend in which he said that the original court documents were sent to him two days after Super Bowl 50, which Manning and the Denver Broncos won over the Carolina Panthers, 24-10. The Super Bowl is likely to have been his last game in football.

A day after Carolina quarterback Cam Newton had been widely criticised for briefly and brusquely answering questions in a post-game news conference, King mentioned in a column last Monday that Manning was not excoriated by the news media after he failed to congratulate New Orleans quarterback Drew Brees at midfield – as is custom – after Manning’s Indianapolis Colts lost Super Bowl XLIV to the Saints in 2010. Manning is white; Newton is black.

“I am here to reveal and explain how Peyton unfairly benefits from a system only available to him and his white peers,” King wrote on his Facebook page. “It isn’t about blasting Peyton, but showing how if Cam did what he did, he’d be blasted for it non-stop.”

King said a Google search showed that USA Today had written a news story and column about the lawsuit in 2003, but, in an era before social media, the articles had not “rocked the American sports world to its core,” as King wrote they would have had they appeared today.

King read the lawsuit and wrote: “The book, which trashes the character of Dr Jamie Naughright, continues to be sold to this very day, while Peyton Manning continues to benefit from his reputation not only as a superstar quarterback, but also an individual of high moral character. In fact, he has reaped tens of millions of dollars in endorsement deals based on a fraudulent mystique he’s cultivated as a good guy, an upstanding citizen, the ideal professional athlete. This document alone puts the lie to all this.”

Would this affect Manning’s decision to keep playing football or retire? Almost certainly not, although Manning’s squeaky-clean image has been booted around a little since Super Bowl 50.

In two TV interviews after the game, Manning said he planned to celebrate the Broncos’ victory by drinking Budweiser deep into the night. Anheuser-Busch, the brewer of Budweiser, said Manning was not paid for the mentions, but Beer Business Daily had reported that Manning, who does many commercials in the United States, is the part-owner of a Bud distributorship in Louisiana. Active NFL players are prohibited from pitching alcohol, so it was widely interpreted that Manning is planning to retire. Manning has not said anything either way.

Additionally, Al-Jazeera reported in December that Manning was supplied with human growth hormone, a performance-enhancing drug illegal in the NFL, by an anti-aging clinic in Indianapolis. Manning, who was one of many players cited in the report, strongly denied the allegations in the report, saying in a statement, “Whoever said this is making stuff up.”