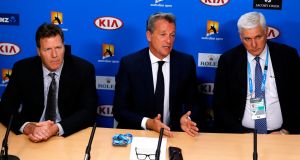 Before a ball was struck, the 2016 Australian Open was pitched into a match-fixing scandal on Monday that pointed a shaky but accusatory finger at an unnamed grand slam winner and seven other players in the main draw who have been investigated for match-fixing or were under suspicion in the past decade.

Heavy hints of a cover-up are due to be aired on the BBC on Tuesday night UK time, after a long investigation in conjunction with BuzzFeed. If proved – which appears far from certain, in the absence of any identified players – the allegations would seriously damage the sport’s image. Most disturbing is the possible involvement of a grand slam champion.

The BBC and BuzzFeed say they have been passed a “cache of documents” dating back to 2007 that expose “widespread suspected match-fixing at the top level of world tennis, including at Wimbledon. Over the past decade, 16 players who have ranked in the top 50 have been repeatedly flagged to the Tennis Integrity Unit over suspicions they have thrown matches.”

The reaction of the various governing bodies at a hastily convened press conference at Melbourne Park on Monday morning was swift, considered and unequivocal.

“The Tennis Integrity Unit and the tennis authorities absolutely reject any suggestion that evidence of match-fixing has been suppressed for any reason or isn’t being thoroughly investigated,” said Chris Kermode, the chief executive of the Association of Tennis Professionals.

“And while the BBC and BuzzFeed reports mainly refer to events from about 10 years ago, we will investigate any new information, and we always do. In its investigations, the Tennis Integrity Unit [set up by the ATP to monitor betting patterns] has to find evidence, as opposed to information, suspicion or hearsay. This is the key here: that it requires evidence.”

Kermode cited the match at Sopot in Poland in 2007 between the then world No 4 Nikolai Davydenko and Martin Vassallo Arguello, who was 87 in the world, which Arguello won when the Russian retired. Betfair, the world’s largest online betting company, voided all bets on the match because of what it regarded as “irregular betting patterns”.

Kermode observed: “A year-long investigation into the Solpot match in 2007 found insufficient evidence. As the BuzzFeed report states itself, the investigators hit a brick wall and it just wasn’t possible to determine who the guilty party was in relation to this match.

“All professional players, support staff and officials are subject to the tennis anti-corruption programme. Tennis Integrity Unit anti-corruption investigations have resulted in 18 convictions, of which six have had life bans.”

However, nearly all have been minor names.

The BBC-Buzzfeed inquiries allege: “The problem of suspicious betting and match-fixing is not going away. Eight of the players repeatedly flagged to the TIU over the past decade are due to play in the Australian Open.”

Benn Gunn, a former police chief constable whose review of betting in tennis led to the TIU’s creation, said: “If they were really serious about dealing with this, then they really need to create an integrity unit with teeth.”

Mark Phillips, who was involved in the first investigation in 2007, has gone on the record for the first time, and told the BBC: “There was a core of about 10 players who we believed were the most common perpetrators that were at the root of the problem. Evidence that we gathered ... we believed was very strong. There was a group of between six and 10 players, really, who were the main focus of the evidence that we dug up.

“As far as we know, nothing happened with the evidence that we presented. Certainly none of the players that we had concerns about faced disciplinary action from the TIU in the next year or two.”

Kermode said on Monday: “All of us here in tennis are absolutely committed to stamping out any form of corrupt conduct in our sport. There is a zero tolerance policy on this. We are not complacent. We are very vigilant on this. We are aware that all sport – all sport, not just tennis – is at potential risk of corruption.

“That is why, in 2008 the Tennis Integrity Unit was set up to tackle this issue head on. We are constantly vigilant and not complacent. Tennis has invested over $14m to address this issue of corruption – and it’s constantly being reviewed. I think that’s the big message for today. This is not something that we are taking for granted.”

As for problems in gathering evidence, the TIU chief, Nigel Willerton, said: “Under the tennis anti-corruption programme, we can demand [PLAYERS’]phones and laptops and iPads. Obviously they have to consent to give them. However, if they don’t then consent to give them, that’s called non-cooperation, and they can be reported and sanctioned. There was a case recently when a player was sanctioned for a two-year suspension.”

Asked about claims that eight players who have been tracked under suspicion are in the main draw in Melbourne, Willerton would say only: “It would be inappropriate for me to make comment as to whether any players are under investigation at the present time.”

On the sensitive subject of sponsorship of tennis by betting outlets, such as BetPlay and William Hill, Kermode said, “I don’t think it’s an issue, because it can actually help at times. Nigel and the Tennis Integrity Unit are working with betting companies all the time to spot corruption.

“The distinction to make is that betting itself is not an illegal pastime, and many people do bet on sport. What we are talking about is corruption. Sometimes we can talk about betting and corruption [AS]the same thing, and they are different.

“It’s in [BOOKMAKERS’]interest that there isn’t corruption, right? They are as strong as we are that we are getting rid of corruption within the game.”

“We have built an international reputation for the integrity of the tournament and the anti-corruption systems we have in place,” Tiley said on Monday. “In conjunction with world tennis we have developed leading anti-doping, disciplinary, anti-corruption and security policies. All involved in the administration of the Australian Open will not tolerate any deviations from our values and rules at any level.”

“Of course the deliberate timing of this story is far from ideal for our event,” Tiley said. “But the important issue here is that we stamp out any form of corruption in tennis. That’s why, many years ago, Tennis Australia pushed hard for an all-sport response to this issue. Stamping out any form of corruption requires a continued focus on prevention, education and investigation.”