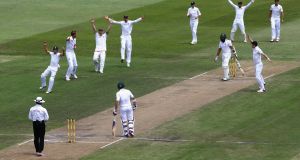 Stuart Broad and his England team-mates appeal unsuccessfully for the wicket of South Africa captain Hashim Amla during day two of the first Test at Kingsmead Stadium in Durban. Photograph: Julian Finney/Getty Images

If there has been no more productive bowling combination for England than Stuart Broad and Jimmy Anderson, then in the rare absences of the latter, Broad has taken on the responsibility of leadership emphatically. There was no Anderson at Trent Bridge in the summer when Broad took the end he preferred and produced the finest bowling figures of his career to destroy Australia. There is no Anderson at Kingsmead either, but Broad, bowling magnificently, has put England in a measure of control in the first Test.

He is urgent in his rhythmical approach, the more so since the freedom his knee operation has lent, relentlessly accurate, pounding out his length, and intelligent.

Each of the first three South Africa wickets to fall were to him, one with the second ball of the innings, and then those of the captain, Hashim Amla, who had been dropped behind the wicket only a few overs previously, and AB de Villiers, the most prized of all, after he appeared to survive a catch in the gully early on.

It was brilliant use of both new and old ball, on a surface that was allowing the seam to bite, offering some turn for the spinners, and was occasionally bouncing from a length to hit the splice. Broad’s first 10 overs have brought him figures of three for 16: incisive bowling and economy is the holy grail of bowling.

South Africa closed the second day on 137 for four, with De Villiers having made an imperious 49, the opener Dean Elgar making a tenacious unbeaten 67, and Temba Bavuna, a neat little player (not pejorative: he is shorter than James Taylor) unbeaten on 10.

Earlier, they had finally bowled England out for 303, at the end of a first session extended almost to three hours. For this they have to thank an excellent effort with the new ball from Morne Morkel who, after a wicketless first day, finished with four for 76, including a spell of three for nought in eight balls, as England stumbled from 247 for five to 267 for nine.

A last-wicket stand of 36 was gold dust for England and frustrating for South Africa. There was to be no century on his return, and in the city of his birth, for Nick Compton, but his 85 was a great effort in seeing England through a tricky first day and underpinning the recovery. There was 41 from Jonny Bairstow, too, and an unbeaten 32 from Broad, who relishes the freedom to create a little mayhem at No 10 without quite having the responsibility of higher in the order. Dale Steyn, who had been outstanding on the first day, looked short of a gallop on the second and finished with four for 70.

Broad is proving talismanic. His warm-up gave away a little as he bowled from around the wicket, and now he began from this angle to the left-hander Stiaan van Zyl, pushing his second delivery in, which the batsman, having watched the first shape away, chose to leave, the ball clipping the top of off stump. For Amla he produced a special delivery. The captain had survived an appeal for a catch at the wicket, with the technology suggesting just the faintest of edges (England chose not to review) and was then dropped by Bairstow, to his right, as the batsman edged Chris Woakes.

Broad, though, was operating over the wicket to the right-handers, from wide of the crease, angling the ball in but occasionally holding it off the pitch with a leg cutter. The one that he produced for Amla was special, compelling the stroke before jagging away and finding the edge.

De Villiers, arguably the finest all-round batsman in the world, meanwhile had himself survived what might, in the fullness of time, and given how he was to bat, have been defined as gamechanging.

For England, it arrived around an hour into the afternoon session with South Africa 37 for two. The ball was still hard ( it was only the 13th over) and Steven Finn was hitting the bat with the sort of heavy-ball jarring that loosens fillings. De Villiers’s innings was in its infancy and Finn surprised him with some extra bounce from a length, the ball taking either the shoulder of the bat, his bottom glove or a combination, and looping gently towards gully, where Ben Stokes dived forwards.

Although the catch reached the fieldsman at grass level, the England team were in little doubt that it had been taken cleanly. The umpires, though, were not so sure (perhaps Stokes unusual diffidence had a bearing, despite his team mates’ certainty) and, as it mostly tends to do, a two-dimensional camera shot apparently created sufficient doubt in the third umpire to back the original inclination. These referrals are inevitably inconclusive and it would be better if umpires were not allowed to refer them: there would be mistakes but fewer than using this inadequate technology.

Having recovered so well, the manner in which the England innings subsided was frustrating. At the start of play there were a further 15 overs until the second new ball, and the wisdom of sending in Stokes rather than a nightwatchman the previous evening was obvious, with licence to try and make merry while Compton continued at his own pace. This Stokes did well enough until he tried to pull Morkel and top edged to gully.

Bairstow and Compton then added 51 before the latter, early on a pull shot, feathered a catch through to the keeper and dragged himself from the field. He had batted more than six hours, a worthy effort in some adversity. Both Moeen Ali, fourth ball, and Woakes, first ball, followed without scoring, and when Bairstow drove extravagantly and edged Abbott to slip, five wickets had fallen for 20. Broad survived the hat-trick and went on to hit five boundaries, with Finn holding an end up well and once driving Steyn straight back past the bowler with the kind of aplomb that might have surprised himself.

Steyn, wearily, got his revenge, winning an lbw decision to end the innings.

Neil Lennon insists he is the man to turn it around for Celtic 08:58
Billy Burns named at 10 to face Georgia; Errors cost Dundalk against Rapid Vienna 08:00
Andy Farrell looking forward to some selection headaches come the Six Nations 06:00
The day a 20-year-old Maradona led a League of Ireland XI a merry dance 06:00
Johnny Watterson: Flaws of sporting gods make them just like us 06:00