Straight sets victory for Novak Djokovic as he eases into Wimbledon 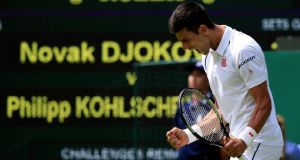 Novak Djokovic celebrates winning the second set against Philipp Kohlschreiber during the first round men’s singles during day one of the Wimbledon Championships. Photo Jonathan Brady/PA Wire

Novak Djokovic was far from his fluent best but the defending champion did enough to beat Germany’s Philipp Kohlschreiber in straights sets and move safely into the second round at Wimbledon.

Djokovic was playing his first competitive match since his shock French Open final defeat to Stan Wawrinka just over three weeks ago and there were certainly signs of rust from the world number one.

Kohlschreiber, however, was too generous at the crucial moments on Centre Court and Djokovic was able to seal a 6-4 6-4 6-4 victory.

There will certainly be tougher tests to come if he is to claim a third Wimbledon title, but Djokovic will be relieved to overcome a potentially tricky opponent in Kohlschreiber, who took Roger Federer to a final set tie-break before losing in Halle earlier this month.

The world number 33 caused Djokovic problems with his devilish slice backhand and he had three break points in the seventh game of the first set but was unable to capitalise, with the first drifting away after a close review.

Djokovic was more clinical, as two Kohlschreiber double faults allowed him to break in the 10th game and sneak the first set.

There were plenty of loose shots from the Australian Open champion, with a number of backhands flying long and simple forehands finding the net, but again Djokovic raised his level just when he needed to.

Leading 5-4, he produced an exquisite lob and a superb backhand pass before breaking Kohlschreiber again to take a two-set advantage.

The third set followed a similar pattern as Kohlschreiber’s serve continued to let him down under pressure and Djokovic broke to secure a comfortable win in just over two hours.

Liam Broady produced a remarkable fightback to boost British hopes at Wimbledon with a thrilling five-set victory over Marinko Matosevic.

Stockport’s Broady was the first Briton in action in this year’s tournament, and turned a two-set deficit on its head to set up a second-round clash with Belgium’s David Goffin.

Broady was cheered on by a healthy family backing, including sister Naomi, due to face Colombia’s Mariana Duque-Marino later in the day.

The 21-year-old wasted a hatful of chances to take control of the first two sets, converting just one of eight break points — but shrugged off that early malaise to storm past the former world number 39.

The reward for that hard-fought victory is a meeting with the 16th seed and world number 15 Goffin, who made light work of a three-set victory over Argentina’s Horacio Zeballos early in Monday’s action.