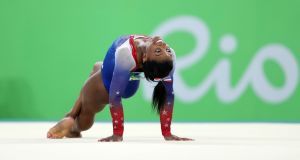 A new Sports Illustrated cover, out on Tuesday, featured Simone Biles posing with her fellow multi-medallists Michael Phelps and Katie Ledecky. Their three necks sported a combined 14 medals, a total that would have put them 12th in latest table ahead of Hungary, Spain and New Zealand. The photograph was out of date before it had even hit the newsstands. Biles’s bronze on beam wasn’t included.

Her powerful shoulders will now have to manage the weight of another one of those heavy gold necklaces. The Olympic superstar said goodbye to Rio with one last victory - and there was yet more good news for Britain as Amy Tinkler, the youngest member of Team GB, took bronze in the last moment of the competition. She became Britain’s youngest Olympic medallist in 32 years.

There is always a grand, climactic feel to the floor and high bar finals, which round off more than a week of artistic gymnastic competition. They are the most eye-catching of the men’s and women’s events, respectively, the ones that hit the sweet spot of the Venn diagram where pure athleticism meets artistic entertainment, so redolent of childhood trips to the circus that you feel you should be watching with a stick of candy floss in hand.

Biles had come into this competition carrying the outrageous hope and expectation not just of her fellow Americans but of gymnastics fans everywhere. It had been decreed that she would be the first woman to complete a clean sweep of Olympic titles here; in the end, her performances on bars and beam brought whispered reminders of her own mortality.

But she was a nailed-on certainty for her floor routine, which would be a world wonder even if it were not being scrutinised by a panel of judges. She can pack more tumbles into a single pass than any other gymnast alive, thanks to her extraordinary power-to-height ratio, and she catapults her 4ft 8in body into the air is if she’s got rocket packs hidden in the soles of her feet.

Biles looked unusually serious when she was announced to the crowd before the final; perhaps the awareness of her legacy was creeping up on her. Was there something a little forced in that smile to the judges, that flash of teeth? If there was, it had left her the moment the music began, a samba beat to which she wiggled her hips and shimmied her shoulders with an expertise the locals surely appreciated.

She had chosen her most difficult routine here - a start value of 6.9 - and performed it cleanly apart from one moment where she was briefly left standing, a little awkwardly, on one leg. Witnessing her signature move - the double layout with a half-twist on landing - on an Olympic stage was the gymnastics equivalent of hearing the Beatles playing Sergeant Pepper at the Hollywood Bowl. The crowd here screamed almost as loud when she landed it and the reward was 15.966.

Until that point Tinkler’s 14.933 - a full .333 above her qualification score - was leading the board, after the charismatic British performer had made beautiful silver arcs through the air in her reflective silver leotard. Biles’s team captain and the reigning world champion on floor, Aly Raisman, who performs her routine to a Cossackian soundtrack and has a certain Russian elegance about her, performed with the grandeur that befits her multi-Olympic champion status.

Her 15.500 knocked Tinkler down to third and there was a long and nerve-racking wait for Tinkler as judges considered the score of the final gymnast, Vanessa Ferrari of Italy, who is a full nine years older than her rival. Earlier, Tinkler had clasped her hands in prayer as she waited for her own score - now she simply waited with a gracious smile, rewarded by the discovery that she has now added a women’s medal to Britain’s gymnastics tally here.

As for Biles, she had won the heart of her nation long before she arrived here, and she will deservedly leave here with a devoted global following and endorsements up to the yin yang; she might even score a date with her huge crush, Zac Efron. Will she return for Tokyo? She would be 23 in 2020. You have to go back to Czechoslovakia’s Vera Caslavska at Mexico City in 1968 to find the last all-around champion aged over 20. But you wouldn’t bet against her.