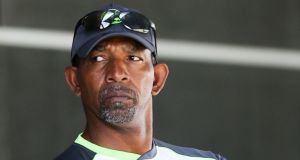 Ireland coach Phil Simmons believes his side have the edge over Zimbabwe ahead of the World Cup Pool B meeting between the sides in Hobart. Photograph: Hagen Hopkins/Getty Images

Having been in the Southern Hemisphere for over a month now, Ireland’s cricketers must have thought they were fully acclimatised.

Yet the flight across the Bass Strait to Tasmania for Saturday’s vital World Cup clash with Zimbabwe in Hobart (3.30am Irish time) has seen jackets and jumpers called for as the mercury drops to something more akin to an Irish summer.

“Well I’ve never been to Hobart when it’s been warm, so this is the only way I know it,” remarked Ireland coach Phil Simmons ahead of the game at the Bellerive Oval.

“So I think it gives us a little bit of home advantage, because I think if it’s cold like this on the day then we’ll be more at home than Zimbabwe will.”

Ireland’s heavy defeat to South Africa and Pakistan’s 129-run over the UAE has pushed Simmons’s side into fifth place in Pool B, albeit with a game in hand over Pakistan and West Indies, the two other sides on four points.

With Zimbabwe on two points after four games and with world champions India to come in their final outing, Saturday’s game really has a huge amount riding on it for both sides.

Simmons, who spent time as coach to Zimbabwe a decade ago, believes Ireland have the upper hand going into the game, even though the African side has won three of the five One-Day Internationals between the sides dating back to the tied game at the 2007 World Cup game in Jamaica.

There was no less excitement the last time the side’s met in the first-round match at last year’s World Twenty20 in Bangladesh, when Alex Cusack scrambled a bye off the last ball in a three-wicket win.

“They bat a long way down, but the thing about it is that we seem to be a little bit sharper than them is some areas and hopefully on the day we are going to be sharper than them in most areas,” said Simmons after training on Thursday.

“We’ve got to look to outplay them in different areas because they have been playing some good cricket, but I think we have the jump on them.”

The game will be the first to be played at the Bellerive Oval in the tournament and Simmons and his coaching staff will wait until their final training session on Friday before deciding on an XI.

Given the windy nature of the ground on the River Derwent, Simmons will give the squad extra time to get used to the difficulties of judging the dropping ball while attempting catches at the ground.

“It’s always been breezy here because of the sea right next door, so it’s something that you have to take into consideration. But because of the way the stands are now it more swirls around, rather than come straight across. A little bit of practice is needed to get accustomed to it, but at the same time we are professional enough to know what to do.”

Simmons again picks from a fully fit 15, although he is likely to stick with Andy McBrine, who impressed against South Africa despite Ireland conceding over 400 runs.

Zimbabwe will be missing their captain Elton Chigumbura after he tore a thigh muscle in the 20-run defeat against Pakistan in Brisbane.

That was a match that they looked well in position to win at 150 for four chasing a target of 236, only to be bowled out for 215.

Built around the strong middle-order pairing of skipper Brendan Taylor and Sean Williams, Zimbabwe have also used the power of Lisburn professional Craig Ervine to good effect in the tournament to date.

But in what looks set to be another high-scoring affair, Ireland’s batting line-up might hold the advantage in securing a third win and edging the country nearer to the quarter-finals.