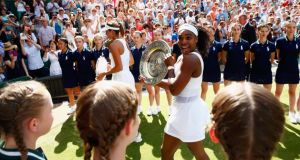 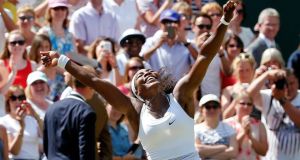 The world number one has now won all three Grand Slams events in Australia, Paris and London and as she won the last Grand Slam of 2014, the US Open, she holds all four titles – the self-styled ’Serena Slam’ .

It comes 14 years after winning her first championship at Wimbledon and is her career 21st. Steffi Graf currently holds the record for number of Grand Slam wins at 22. If Williams can successfully defend her US Open title at the end of August in New York, she will have achieved a calendar Grand Slam.

“Man it really is a great feeling,” said Williams. “The moment is still setting in a little bit. I wouldn’t have thought last year after winning the US Open I would win the Serena Slam. It’s just amazing. It feels really, really good.

“I felt the extra week after Roland Garros really helped. I do have some aches and pains but overall I feel more fit, feel I can do more.”

After a nervous opening game where Williams hit three double faults, dropped her serve to the 21-year old and struggled to find rhythm, she slowly gathered herself and the points that were initially trickling her way in the early stages began to arrive in torrents.

Muguruza, playing in her first Grand Slam final, only occasionally raised her game throughout to force the American into rallies with her heavy ground strokes. It was Williams’s inconsistency that largely allowed her opponent into the match.

But as the Williams’s famous serve warmed the games came more easily. She broke Muguruza in the first set to level at 4-4 and again in the 10th game to take the set 6-4. From that stage the points and games and almost the second set fell to Williams as Muguruza all but imploded as the Centre Court hushed for what appeared to be another culling.

But from a set up and serving for the match Williams seemed to become aware of the magnitude of not just winning Wimbledon but making history. Muguruza simultaneously stepped up her game and she broke Williams serve. The Spaniard suddenly found the game that had gotten her to the final.

She fought back from 5-1 in the second set to win the game for 5-2, then held her serve for 5-3. Williams had her second chance to serve for the match but after slinging down three aces, she found herself defending her sixth break point, a Muguruza forehand winner improbably taking the match to 5-4.

“She came out there to win. She really stepped up to the plate,” said Williams. But the Spanish inquisition of Williams was a short lived three-game run. The 33-year-old snapped out of her head funk and easily broke her opponent’s serve in the next game, a wide forehand from Murguruza on match point floating wide.

Even then there was a strangely anti-climactic moment, when no one was quite sure if the ball was on the line or wide.

“With Serena you lose two points and you lose the match. I think I fought all I could fight,” said Muguruza. “You have Serena in front of you and thinking she has won five times here! I learned all the people are nervous, even Serena because I saw it.

“When I lost the first set I was sad because I saw chances. I just kept going but she kept serving aces, winners what can I do. At the end I knew she would be nervous closing the match so I thought I have a chance.”

“I don’t have words today how I feel. I’m very proud,” added Muguruza. “In Spain we don’t have that much grass . . . but I’m going to change things now.”