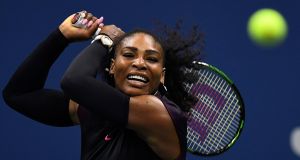 Serena Williams in action on Thursday in the US Open Tennis Championships at the USTA National Tennis Center in Flushing Meadows, New York. The US Open runs until September 11th. Photograph: Daniel Murphy/Epa

The milestones continue to whizz past for Serena Williams, who is running out of records to break and history to rewrite as she approaches the business end of a tournament she has won six times, including three of the past four years.

Should the world number one prevail in today’s third- round match at the US Open against Sweden’s Johanna Larsson, it will mark her 307th career victory in grand slam play and lift her past Martina Navratilova for the most in the Open era.

“Sometimes I don’t even know that I’m hitting these milestones,” she said. “But some of them I’m really proud of. This one’s kind of cool.”

On Thursday, the 22-times grand slam champion tied the record beneath the new Arthur Ashe Stadium roof with a fairly straightforward 6-3, 6-3 win over her countrywoman Vania King. With Jay Z and Beyonce looking on from her players’ box, Williams pounded 13 aces and 38 winners compared with her opponent’s four, closing the show in a scant 65 minutes.

But the chronic perfectionist was highly critical of her performance afterwards, lamenting her 28 unforced errors and inconsistent return game.

That Williams can perform so highly on an off day should warrant concern for the 47th-ranked Larsson, who bowed in straight sets in their only two meetings. The 28- year-old has assured herself a career-high ranking after matching her furthest journey into a major tournament with Thursday’s second-round win over the Czech Denisa Allertova, but will be a heavy underdog against Williams at a tournament where she has won 28 of her last 29 matches.

The top-seeded Williams is humbled by her chance to eclipse Navratilova, whom she described as “one of the best players to ever play tennis, someone that I never even thought I could be as good as numbers- wise”. But it is a milestone that pales compared with Steffi Graf’s professional-era mark for grand slam titles, which Williams can eclipse with five more wins here.

“I knew it was on the horizon,” said Williams of today’s potential history-making win. “I knew at Wimbledon that I wanted to get there. Obviously I’m excited about that. I would like to take one more step, several more steps.”

Former world number one Caroline Wozniacki continued her resurgence with a commanding 6-3 6-1 win over Romania’s Monica Niculescu to reach the fourth round.

The Dane, a US Open finalist in 2009 and 2014 but unseeded this year after being sidelined for two months by an ankle injury, dominated from the start and wrapped up victory in just under an hour and a half.

Niculescu, ranked 16 places above Wozniacki in the rankings at 58th, made life tough early on, particularly with her sliced forehand, which is a rarity on the WTA Tour. “You have to be ready to grind and it’s not pretty but I got a good workout in there. She made me run a lot,” Wozniacki said.

In 2010, Rafa Nadal tweaked his service action to give him more power and it helped him to US Open glory later that year. Six years on and despite the effects of a wrist injury, he may have found another secret weapon as he bids to win a third US Open crown.

While in 2010 it was an adjustment to his grip that enabled him to hit 130mph serves, this time the Spaniard has shifted his serving position on the ad-court– the side where most of the key points are played – standing far wider than usual.

Crucially, because he is standing further to the left, this means the Spaniard can better protect himself against the flat backhand crosscourt return that Novak Djokovic and Andy Murray have used to such devastating effect against him. Guardian Service