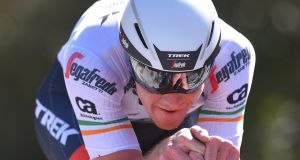 Ryan Mullen: “I’m a TT rider and I’m here to ride the TT, so I’m going to give it my best like I always do and see where that gets me.” Photograph: Tim de Waele/Getty Images

Irish road race and time-trial champion Ryan Mullen will start his first Grand Tour with immediate ambition, trying to win Friday’s opening stage of the Giro d’Italia. The Trek-Segafredo rider is a strong time trialist and will begin the 9.7km race against the clock in Jerusalem as a dark horse for success.

“I didn’t get to ride the course yet but I’ve seen videos,” the 23-year-old said on Wednesday. “If it were up to me designing the course, I would have made it a little bit flatter, so that it might suit me a little better. It looks like a cool course, it goes through some nice parts of the city. It should be a pretty good spectacle, but it’ll be challenging.

“I’m a TT rider and I’m here to ride the TT, so I’m going to give it my best like I always do and see where that gets me.”

Mullen’s time-trial pedigree was evident early on with some extremely quick results as an underage and junior rider. In 2014 he finished just 0.48 seconds behind Australian rider Campbell Flakemore in the world under-23 time trial championships. The silver medal showed how much potential he has, and he gave a further indication when he finished fifth in the Elite championships two years later. He was just 22 at the time.

Also aiming for a strong showing on Friday will be Nicolas Roche (BMC Racing Team). He is hoping to ride strongly in the general classification, and knows that a strong start is important. Sam Bennett (Bora-Hansgrohe) is the third Irishman in the field and will also dig in for a good result. His talent is for bunch sprints and he will likely have the opportunity on Saturday’s flat road race stage to Tel Aviv.

A fourth Irishman, Philip Deignan, was provisionally listed to start but was ultimately passed over for selection by Team Sky.

In other news, three Irish riders are competing in the Tour de Yorkshire, which began on Thursday. Stage one was won in a breakaway by the Briton Harry Tanfield (Canyon Eisberg); Robert Jon McCarthy (JLT Condor) was best of the Irish in 22nd, with Eddie Dunbar (Aqua Blue Sport) 34th, Ben Walsh (Vitus Pro Cycling) 68th and Sean McKenna (Holdsworth Pro Racing) 105th. All finished in the main bunch, five seconds behind Tanfield.

Meanwhile, two more international teams have been announced for the Rás Tailteann, bringing the total to 10. A national team from Wales and the Germany Bike Aid squad join the others already named.

The former will include general classification rider Peter Kibble, 15th in the recent Commonwealth Games time trial, Zachery May, Dan Coombe, Will Roberts and James Tillett.

The Germany Bike Aid team previously competed in the Rás Tailteann in 2012, 2013 and 2016. The lineup for this year’s race includes Nikodemus Holler, who won the mountains competition and finished 10th overall in 2016. Lucas Carstensen will be the team sprinter, with the remainder of the squad to comprise former Eritrean national champion and 2017 African Continental time trial champion Meron Teshome, Adne Van Engelen and Patrick Lechner.

The Rás begins in Drogheda on May 20th.