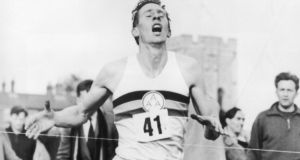 Roger Bannister crossing the tape at the end of his record-breaking mile run at Iffley Road, Oxford. Photograph: Keystone/Getty Images

There is a gentle irony in that forever lasting impression of Roger Bannister. The charming modesty beyond words, the gentleman and gentle man, yet quite possibly the hardest athlete to ever step foot on a running track.

It was May 2004, in a small upstairs suite at the Westbury Hotel in Dublin, on the 50th anniversary of Bannister’s four-lap run around the Iffley Road track at Oxford.

In the long history of firsts, so went the story of sport’s greatest barrier – the four-minute mile - broken at last by a 25-year-old medical student from London.

Only when meeting Bannister in Dublin that day, for the first and now sadly only time, the last thing he wanted to talk about was running.

Bannister’s death at age 88 passes him into running immortality, although he spoke about that achievement with such humility as to make it seem nothing more than destiny. Which indeed it was.

Then aged 75, with his still unmistakably rangy athletic looks, he sat for an hour and he talked almost entirely unprompted, his energy and warmth increasingly infectious. Occasionally his wife, Moyra, interrupted with some details, but Bannister flowed with all the grace and rhythm that he carried around the running track.

“You know I’ve always loved it here,” he said of Ireland, “and my wife is a quarter Irish. So I feel that every second year at least I ought to visit. I just find the attitude and wit and intelligence of the Irish people attractive. And, of course, the Abbey Theatre. ”

When eventually pressed on his historic run, Bannister would almost jokingly reminisce: how he has the shoes and the vest but lost the number; how someone handed him a jar of the old cinders when the track was later torn up.

“No, it wasn’t something I’d always aspired to do. I was really doing it as preparation for the Empire Games later that summer. I’d failed in the Helsinki Olympics in 1952, where I’d planned to retire. I thought I had it all worked out. Gold medallist, 1,500m, now get on with the medicine...”

Only after finishing fourth in those Olympics did he drift towards the seemingly unachieveable goal. Such was the mystique surrounding the sub-four-minute mile in 1954, that there those who genuinely believed he might die trying.

“I also realised that someone was about to break four minutes. And that it was either going to be Wes Santee, John Landy or it was going to be me. And I’d decided on two things: that you had to get the pacing right, so that was when I formed the very close relation with Chris Brasher and Chris Chataway. And the second thing was timing and the venue, because I knew Landy was offered perfect conditions later that summer.”

So for the weeks and days leading up to May 6th, 1954, he perfected every last detail of his interval training at the old Paddington Recreation Ground in London, before making the hour-long train ride to Oxford. He also recalled, as inconceivable as it sounds now, how he took a complete rest for the five days before.

“Well, I walked about and so on. But it was to ensure I would feel very special when the day came, and be ready to tear up the track. That was probably why I felt Chris Brasher wasn’t going fast enough on the first lap, which, of course, he was.”

Equally inconceivable by modern sporting standards, Bannister ran just two more major races in the 1954 season – and then retired. He beat Landy in an epic duel to win the British Empire and Commonwealth Games in Vancouver, Canada, then won the European title in Bern, Switzerland.

Not that Bannister’s claim to fame ended in 1954: later he became equally celebrated in the medical world for his work in neurology, and later still became the first chairman of the British Sports Council.

In running that 3:59.4, Bannister broke not just a physical barrier but a psychological one. Just 46 days later Landy improved Bannister’s 3:59.4 to 3:58.0 and history hardly noticed. A year later three men ran under four minutes in the one race, and by June 1956, Ireland also had its first sub-four-minute miler in Ronnie Delany.

“I still think that Bannister’s effort wasn’t so much a physical drain as it was a psychological drain,” said Delany recently, on the 60th anniversary of his 1956 Olympic 1,500m title, and the 3:59.0 he ran in California in June 1956. “For me anyway the psychological barrier associated with the four-minute mile was disappearing by then.”

When last hearing Bannister’s voice, it was on air, in 2014, when in a BBC Radio Oxford documentary to mark the 60th anniversary of his sub-four he first spoke of having Parkinson’s disease, and the enduring wonders of neurology that still intrigued him.

“Where do you stop, after all, with the brain? How does it function? What are its limits? The work seems unending...”

In the purist of athletic terms, Bannister wasn’t only the first man to see no limits on what could be run for the mile. He lived and breathed it beyond words.