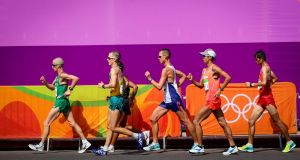 Ireland’s Rob Heffernan has been moved up to fifth place in the 50km race walk, after he originally came home sixth on a sweltering day Rio.

Heffernan, who won the bronze medal in London four years ago after gold medal winner Sergey Kirdyapkin was belatedly suspended for doping offences, ran a time of 3.43.55 on Friday - two minutes off winner Matej Toth of Slovakia.

Toth ran a time of 3.40.58, coming in ahead of Jared Tallent of Australia and then Hirooki Arai of Japan, who came third but was later disqualified for an infringement.

Evan Dunfee was moved up into the bronze medal position.

Brendan Boyce was the other Irish athlete to complete the race, finishing in 19th position with a time of 3.53.59, while Alex Wright dropped out after 35kms.

The race proved a gruelling test for athletes, with second through to fifth place all collapsing and needing medical attention after crossing the finish line.

France’s Yohann Diniz finished in eighth position, despite having collapsed twice during the event.