Rio 2016: O’Donovan brothers help each other to finishing line 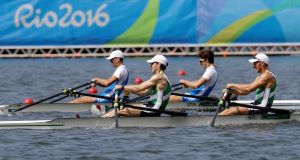 Gary O’Donovan and Paul O’Donovan winning the men’s rowing lightweight double sculls heat: they were just .38 of a second ahead of the Italian crew. Photograph: Luca Bruno/AP Photo

The best thing about having two brothers qualifying for an Olympic semi-final in the same boat is hearing them explain exactly what happened: Gary and Paul O’Donovan occasionally finish one another’s sentences in their thick Skibbereen brogue, as if standing on the shore of the Irish Rowing Centre in Cork, rather than the Rio rowing lagoon.

In winning their heat of the lightweight doubles in 6:23.72, .38 of a second ahead of the Italian crew – which guarantees their place in Wednesday’s semi-final – it is clear that they are not here just to admire the scenery.

Gary, at 23 and one year older than Paul, reinforces that impression as they now eye up a place in the final.

At which point Paul interjects: “God no, Jesus. We go out and try and win every race we can. That’s the kind of mentality we have. We were quite confident we could beat them as well. We were quite calm and collected in our race plan, and it fell nicely into place . . . ”

“I wouldn’t say it was a slow start, it was probably a bit more calculated and measured where we hit our race pace a little bit before the rest of them and maintain a bit of faster speed coming through the middle and you could see that as we started to move through the rest of the field. Some of them blast off and try to lead the way.”

There is every reason to believe they can make that final and if so challenge for a medal. Like the women’s lightweight doubles, they also experienced a 24-hour delay, not that it mattered much to them either.

“We were looking forward to racing yesterday,” says Paul, sounding typically driven and fearless. “We did our weigh-in and we were like, ‘yeah okay, let’s race’.

“Then it was delayed and it was, ‘okay’, we had a bit more time for resting anyway.”

“We’ll just take it as it comes,” Paul says. “The draw isn’t out yet. On paper we will be one of the favourites. We were fifth coming into the regatta, Italy were fourth. So we’re after overstepping them now, so on paper we should be the favourites to get into the semi . . . ”

Before Gary jumps in again: “But this is the Olympic Games, and anything could happen.”

Arsenal deny Chelsea at the death; Why there’s more to Saracens than money 07:51
Novak Djokovic swats aside Ito to reach Australian Open third round 07:20
Seán Moran: Total disregard for schools as GAA votes one way and acts in another 08:10
Rowe and Dublin ready to get back down to business 06:00
Gordon D’Arcy: There’s more to Saracens’ success than money 06:00
Here is your handy guide to sport on television this week