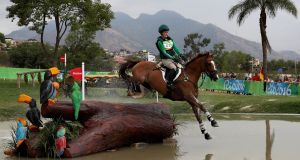 Ireland’s Claire Abbott on Euro Prince during the Eventing Cross Country held at the Olympic Equestrian Centre on the third day of the Rio Olympic Games. Photo: David Davies/PA Wire.

Sanita Pušpure, who battled through the worst of “horrendous” conditions in Saturday’s heats, is back on the water at the Lagoa Stadium for the quarter-finals of the women’s singles sculls. The European bronze medallist will be expected to make it through but will be taking nothing for granted.

A medal looks beyond the Irish three-day eventing team as they head into the decisive showjumping stage at the Equestrian centre in Deodoro. Clare Abbott, Jonty Evans, Mark Kyle and Pádraig McCarthy are in eighth place overall after Monday’s cross-country with Evans best placed (14th) in the individual standings. The team will be without McCarthy on Tuesday after he was eliminated after being unseated in the cross-country.

Shipping eight goals in your first two pool games hardly represents ideal preparations for facing a side ranked third in the world and Olympic champions in both of the last two Games. A third straight defeat to Germany will spell the end of Irish hopes of advancing to the knockout stages - Craig Fulton’s side will be massive outsiders at the Hockey Centre.

Annalise Murphy is in fourth place overall going into races three and four in the Laser Radial class. The Dun Laoghaire sailor won her first race on Monday but was outside the top 10 in the second. Carlow’s Finn Lynch opened his debut Olympics with a 14th place in his first race followed by a 27th place to lie 21st overall for the day.

Having become the first Irish swimmer ever to progress in backstroke at an Olympic Games, it’s essentially bonus territory for Shane Ryan returns to the pool in the 100m Freestyle. The cocksure 22-year-old will be confident of advancing to tonight’s semi-finals which will take place just after 2am.

After testing the Rio waters on Saturday in the 100m breaststroke, Nicholas Quinn returns to the pool in his favoured 200m breaststroke this evening. The 23-year-old from Mayo Castlebar failed to make it out of the heats on Saturday and will need a solid swim today if he is to make tonight’s semi-finals (3am).

With the defeat of Paddy Barnes on Monday, it falls to David Oliver Joyce to lift spirits in the Irish boxing team as he returns to the ring at the Riocentro. A comfortable win over Andrique Allisop in his opening lightweight bout set up this last 16 clash with Albert Selimov, the veteran Azerbaijani with two European titles under his belt.