Rio 2016: After ugly drugs shadow, Irish boxing back to what it does best 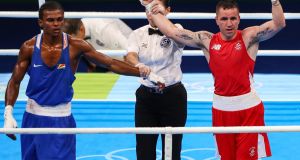 Ireland’s David Oliver Joyce is declared the winner of his Men’s Boxing Round of 32 Light 60kg preliminary bout at the 2016 Rio Olympic Games. Photo: James Crombie/Inpho

After the unexpected lurch into Olympic laboratories, Irish boxing returned to its natural home on Sunday with two wins from two debut fighters. On a sweltering morning in Barra, Steven Donnelly booked his place in the 69 kg division while later Sunday evening, under light rain, David Oliver Joyce, an Olympian after narrowly missing out on Beijing to London, brushed off the challenge of Andrique Allisop to set up a tantalising meeting with world championship silver medallist Albert Selimov on Tuesday night. Joyce was elated by his win but not entirely surprised.

“I hit him some cracking shots but then it got messy. He dropped the head and I was getting a bit close to him so I kinda had to step back and pick my shots again. And fair dues to him. He took some heavy shots off me so you have to give him credit. I box at a high pace. He was wrecked at the end of it so that’s a good thing.

“It has been a long time coming. It has been nine years I’ve been focussing on this. But that is a good thing. You put your head down and drive on.”

Joyce quit boxing for seven full months after missing out on London but the death of his grandmother last year convinced the Athy fighter to commit for one last try. At 29, he took his Olympic bow. Selimov is thirty.

“Selimov..his record speaks for itself but he is pushing on,” laughed Eddie Bolger.

“He likes to control and we are going to try and take him out of his comfort zone. Davy has sparred him a few times and we could paint his tactics on the front of this building. It will be pressure, pressure, pressure.”

“We are all here to go right to the end. No matter who we meet we are going to push them aside and go forward.”

After the controversy and distraction caused by the revelation of Michael O’Reilly’s failed drug test on the eve of the Games, this was a return to normal service. After watching Steven Donnelly win on a unanimous count in the morning session, head coach Zor Antia said that the news had not unsettled his stable of boxers. Donnelly reiterated that. “It’s old news now. We have to concentrate on our own game. What happens happens.”

Rio represents a second coming for Donnelly, who was almost lost to boxing completely following a dismal experience at the Commonwealth games in Delhi six years ago, when he was sent home early for late night rowdiness and drinking in the team compound. When he returned home, he lost interest in fighting and went through what he told the Ballymena Times was ‘a mad period’ of ‘drinking myself into oblivion, getting into fights, getting barred from pubs.’ That was then: he lost two full years but after apologising to those close to him, he returned to trainer Gerry Hamil and was rewarded with a qualifying place for these Olympics last December. And on a sweltering morning in Rio, Donnelly controlled an early bout of nerves to fight three composed rounds against Zohir Kadache, a 30-year-old Algerian with quick feet and speedy, wild left and right hooks which he threw about the ring indiscriminately.

“I just had to watch and not hold my feet too much; get in and out, fast work rate, used my jab and it worked. It was ok. I get nervous before every fight, as do all fighters, but it’s how you handle it. And I handled it pretty well and put on a great performance. I’ll only get better as well.”

The optimism and solid confidence is in harmony with the can-do quality which has transformed Irish boxing in the last two Olympic cycles. Donnelly will box against Mongolia’s Tuvshinbat Byamba on Thursday, a solid, un-showy 29-year-old who had earlier cut through the showboating Argentine fighter Alberto Palmetta to the lusty delight of the Brazilian crowd. The locals also took a shine to Donnelly, chanting his name to the old ‘Freed From Desire’ chant, which has become the Zika virus of sports crowd chants. Donnelly hasn’t got a big entourage with him so the local support helps.

“No family or friends. I like to keep them all back home: there’s less pressure on me. I’ll keep it going now and see what happens. It has been brilliant. The Village is great. We arrived on the 29th and every day the buzz kept picking up. Seeing athletes walk by, Andy Murray walked by the other day, ‘alright Andy.’ It’s great seeing famous people, Tyson Gay, Michael Phelps, we met all those lads at the ceremony the other night so that was great.”

Paddy Barnes will expect to keep the Irish wins rolling when he boxes Hasanboy Dusmatov of Uzbekistan on Monday at 3.45 Irish time.

“The camp is buzzing. We are all here to go right to the very end,” promised Joyce. “No matter who we meet we are going to push them aside and go forward.”