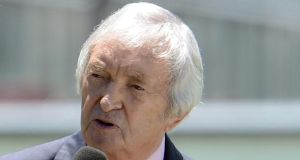 Richie Benaud, who has died aged 84, was perhaps best known latterly for his work as a global cricket commentator, with his distinctive voice, familiar fixed stare, prominent bottom lip and carefully tended coiffure. But he had been a distinguished performer for Australia on the cricket field himself, playing for his country for 12 years until 1964.

The best of his career hung principally on the special Test series of 1960-61, when he captained Australia against the visiting West Indies side led by Frank Worrell. Some tedious contests had been inflicted on the watching public, with more to follow in the 1960s. But that extraordinary five-match encounter produced electrifying batsmanship, and bowling that was less concerned with shutting the game down than keeping it moving.

The opener at Brisbane delivered the thrill of cricket’s first tied Test match. At Adelaide, a nation was brought to a standstill during a long, pulsating last-wicket stand between Ken Mackay and the near-hopeless No 11 Lindsay Kline as they secured an unlikely draw for Australia. When, a few months later in England, Benaud took veteran Ray Lindwall’s advice and bowled his leg-spin around the wicket into the rough, when all seemed lost in the Old Trafford Test, his wicket-taking that afternoon ensured that Australia retained the Ashes and raised the captain close to sainthood in the estimation of his team and his country.

Benaud, who was born in Penrith, just west of Sydney, into a family of Huguenot origin, had a keen cricketer for a father. Lou Benaud, who had once taken all 20 wickets in a bush match, keenly and wisely guided his two sons. John, who played in three Tests, was 13 years younger. After attending Parramatta high school, Richie made his New South Wales debut on the final day of 1948. Three years later, against the West Indies at Sydney, he first played for Australia. His selection was frequently questioned in those early years, when much other flowering talent was evident in domestic cricket. In 1952-53 Benaud played against South Africa, recording a duck and having his front teeth smashed while fielding at gully in the Sydney Test, which coincided with his honeymoon. It was not the first time he had been hospitalised by a blow to the head. Four years previously he had been hit in the face while batting for New South Wales 2nd XI in Melbourne.

Then came the 1953 tour, the first of three he was to make to England as a player. In his three Tests he averaged just three runs with the bat – scoring 15 runs over five innings – and took two wickets for 174 before ending the long tour in glory with 135 in a festival match at a crowded Scarborough ground, hitting 11 sixes to equal the world record at that time. Against Len Hutton’s dominant England tourists in 1954-55 he again did little with bat or ball, just as he struggled in 1956 on his second tour of England, the Lord’s Test apart: having taken a memorably sharp reflex catch in the gully to dismiss Colin Cowdrey, Benaud was at his cavalier best in an innings of 97, ended by a top edge as he tried to reach his hundred in the grand manner by hooking Fred Trueman.

On the way home he finally fulfilled his potential by taking 7 for 72 (this remained his best Test return) at Madras to set up an Australian innings victory over India, the short series being sealed at Calcutta in the third Test when Benaud took 11 wickets for 105. Having helped Australia win the 1955 series in the West Indies (Benaud’s century in Jamaica, one of five in an innings of 758 for 8 – still Australia’s highest total in Tests – came in a mere 78 minutes), after four years and 27 Test matches it was felt at last that he truly belonged in the side.

His performances in South Africa in 1957-58 reinforced that belief. Often bare-headed, and a somewhat stooping, rangy figure at the crease, he cracked a century in both the Johannesburg Tests, averaged 54 in the series, and took 30 wickets at a rate of just under 22 runs each in the five Tests. Time and again he and fellow bowler Alan Davidson took the opposition by storm, and the Australians, led by 22-year-old Ian Craig, finished the tour unbeaten. Then, within the year, Richie Benaud became captain of his country. Craig had fallen ill, and just when the senior player, Neil Harvey, was expected to succeed to the leadership, Benaud’s name was announced. The selectors’ long-term planning had reached fulfilment.

His first series as skipper was remarkable for a number of reasons. A strong England party, led by Peter May, were widely expected to retain the Ashes. But some of them played below expectation, and Australia’s attack contained several bowlers whose actions were perceived as highly suspicious. Benaud’s crew cruised to a 4-0 victory, the skipper taking 31 wickets for an average of 18.83 runs each. Within the year he had spun his way to a further 47 wickets in eight Tests in Pakistan and India, and all was set for what was perceived as a world championship contest against the visiting West Indies team. The chairman of selectors, Sir Donald Bradman, made it clear that he was keen to see Test cricket rescued from a period of dull introversion, and the two captains approached the series in a positive frame of mind.

By that summer’s end, with the beaten but popular West Indians having had a tickertape motorcade send-off in Melbourne, Richie Benaud’s own popularity was sealed. He had brought novel flashes of exhibitionism into play on the cricket field, racing over to embrace a fieldsman after a catch, his own shirt unbuttoned almost to the navel. Soon after television came to Australia he appeared in a commercial, tending his garden with a Victa lawnmower. In 1961 he was made an OBE for services to cricket.

The Ashes were retained in England in 1961, though a shoulder injury kept Benaud from the Lord’s Test, which was won by Australia under Neil Harvey. The decisive victory came in the fourth Test, at Old Trafford, when Benaud’s 6 for 70 and an unlikely Australian 54-run victory shamed England, who fell from 150 for one to 201 all out.

In his final Ashes series, in 1962-63, the tempo reverted to that of the bad old days. Three of the Tests were drawn, Australia’s Bill Lawry, Bob Simpson and Ken Mackay scoring at a snail’s pace (matched by Geoff Pullar, Ken Barrington and Cowdrey for England). Although the shoulder injury had affected him, Benaud did produce a memorable piece of bowling in the New South Wales match against the Englishmen, taking 7 for 18, his best-ever figures in first-class cricket.

The next season saw the last of Benaud on the field of play, apart from some later charity matches and light-hearted private tours. He played three Tests against South Africa in 1963-64 under his successor as captain, Bob Simpson, whacking a memorable 90 on his home ground, Sydney, having calmly endured the trauma at the start of the season of captaining for the last time while his key fast bowler, Ian Meckiff, was repeatedly called by umpire Egar for throwing. Benaud removed Meckiff from the attack and did not recall him.

His career in television then took off, while his contract with the News of the World was to proceed for half a century until the paper closed in 2011. That TV commentary style lent itself to much mimicry, and his pronouncements, carefully rationed, were widely regarded as gospel. He was shrewd not only from the weight of experience but in the cautious way he rationed opinions. Such guarded humour as he evinced bore the touch of a man who was keen to be seen above all else as shrewd.

Although Benaud preferred to avoid controversy, he waded in when covering Australia’s tour of the West Indies in 1965, taking eye-opening photographs of the fast bowler Charlie Griffith and writing of his concerns over the legality of the Barbadian’s action.

His major advisory work for Kerry Packer during cricket’s revolutionary upheaval in the late 1970s alienated him in some traditional quarters, one consequence being an outcry for Benaud to be removed from BBC’s television commentary panel. But he was a survivor, even if his friendship with Bradman never quite recovered from this cricket civil war.

He wrote a number of books, rather serious works written with little flourish, and there were two books about him, one by AG Moyes and a later study by Mark Browning. While a move to preserve Benaud’s childhood home failed, he was honoured with a lifesize statue at the Sydney Cricket Ground, his spiritual home – his actual homes having been in Sydney’s Pacific-side suburb of Coogee and on the French Riviera and in London.

Benaud did, however, manage to voice a touching tribute to Phillip Hughes, who died when struck by a bouncer last November, which was screened before Australia’s Test series against India last December.

His first marriage, to Marcia Lavender, with whom he had two sons, was dissolved; he later married Daphne Surfleet, who had been secretary to the cricket writer EW Swanton.