UCD, Pembroke Wanderers and Ulster’s Lurgan also through to semi-finals 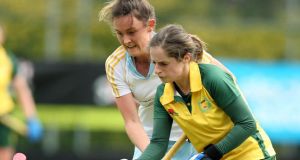 Holders Railway Union, last season’s beaten finalists UCD, Pembroke Wanderers and Ulster’s sole representatives Lurgan are all through to the semi-finals of the Irish Senior Cup, the draw for which will be made today.

Railway had a comfortable 6-2 win away to Ballymoney, Emer Lucey scoring twice. Pembroke against Loreto went to penalty strokes after the game finished 2-2. Rachel Scott, Rachel O’Reilly and Alice Ward converted their efforts to give Pembroke a 3-2 win in the shoot-out.

UCD defeated old Alexandra 2-0 on Saturday, Anna O’Flanagan getting both of the students’ goals. And up north, Lurgan repeated their recent league success over Ulster Elks, Charlene Hull getting the game’s only goal.

Back in Leinster, Hermes moved within three points of leaders UCD with a 9-0 drubbing of Corinthian on Saturday.