Railway and UCD to renew rivalry in semi-final clash 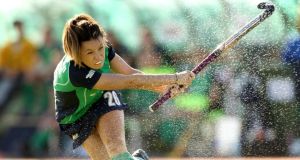 Defending champions Railway Union will meet UCD, in a repeat of last month’s Irish Senior Cup final, and Loreto will take on Ards in the semi-finals of the Irish Hockey League next Saturday after the clubs qualified from their pools at the weekend.

Victories for the Leinster sides saw them retain their top two places in their pools and advance in the competition, but a 3-0 defeat by UCD, combined with Ards’ 2-0 win over Lurgan, saw Ballymoney overtaken by their Ulster rivals in pool B.

Loreto maintained their record as the only unbeaten side in the pool phase with a 5-1 win over Ulster Elks, while Railway secured the runners-up spot with a comprehensive 4-0 victory over Hermes.

Pegasus needed either Loreto or Railway to lose, so their 3-2 defeat of Catholic Institute was in vain, and like Hermes they miss out on a place in the semi-finals for the first time since the event began in 2009.

Anna O’Flanagan made it seven goals in five pool games when she got a double in UCD’s victory over Ballymoney. Becky Weir and Sara Alexander, meanwhile, got the goals for Ards against Lurgan that put them through to the last four.