Fascinating clash of top two in prospect at Park Avenue 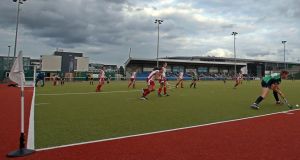 A week after huge Irish Senior Cup wins, when they scored 19 goals between them, Railway Union and UCD will expect a somewhat sterner challenge in the league tomorrow when they meet at Park Avenue, with both sides defending unbeaten records.

The students have yet to drop a point in their five games so far, (they’ve scored 30 goals and conceded two) and a win tomorrow would put them five points clear of Railway at the top.

The only blemish on Railway’s record was last month’s draw with Loreto. And third-placed Loreto wouldn’t object to a draw between the top two tomorrow, allowing them to make up ground on both – so long as they defeat Corinthian at home.

Pembroke Wanderers, in fourth place, will hope to build on last weekend’s impressive draw away to Loreto when they take on sixth-placed Old Alexandra tomorrow.

Hermes, in fifth, who have struggled for goals in the campaign, play Trinity, the team with the most ‘goals against’ so far. North Kildare, still looking for their first point, host Glenanne.