Professional boxers to be allowed to compete at Rio Olympics 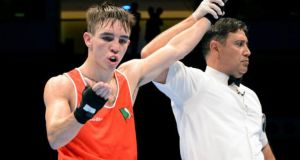 Michael Conlan will be one of Ireland’s main medal hopes at Rio 2016. Photograph: Inpho

Professional boxers will compete at the Rio de Janeiro Olympics after the international boxing association AIBA approved a constitutional change on Wednesday, its president said.

AIBA boss Ching-Kuo Wu said the change of the AIBA constitution was approved with 95 percent in favour, paving the way for professionals to fight for medals for the first time at the Olympics starting on August 5th.

“We approved it and now they can compete,“ he said.

The move has also earned a lot of criticism as many argue it would be unfair to amateur boxers who have trained for the Games for years and who may now have to make way for the professionals.

Under Wu‘s leadership, AIBA set up the semi-professional World Series Boxing (WSB) in 2011 in which fighters earned money competing for city-based teams. He also introduced women‘s boxing at the Olympics in London in 2012.

Some of those WSB boxers have already secured places at the Rio Games through official qualifying tournaments.

Amateur boxing has had its share of Olympic champions who have gone on to become top professionals, among them Muhammad Ali, Joe Frazier, George Foreman and Vladimir Klitschko.