Pietersen and England knuckle down in Melbourne 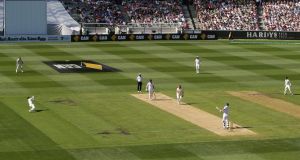 Kevin Pietersen of England is dropped by Australia’s George Bailey off the bowling of Ryan Harris during day one of the Fourth Ashes Test at Melbourne Cricket Ground. Photograph: Michael Dodge/Getty Images

The Melbourne Cricket Ground was packed to the rafters. From the front rows to the nose-bleed gods, 91,092 people turned up, beating the old official record of 90,800 when West Indies were here in 1961, the difference now probably the England support staff.

They witnessed a day of attrition in which England finally thrust off their Adelaide disease where, philanthropists to a man, they donated their wickets, and instead tried to sell them dearly, while Australia throttled the life out of the innings with disciplined bowling, largely directed outside off stump and dutifully flagged through with disregard. For hour after hour it became a game of who blinked first.

As always there is a balance to be drawn between attack and defence but the England batting has been under the hammer all series while the cricket world is full of have-a-go heroes who are the first to criticise when wickets are thrown away with apparent abandon. There are no complaints from this quarter.

By the close though, it was Australia once more who held the upper hand, the second new ball making inroads into the lower order. England reached 226 for six, with everyone but Ben Stokes of the top six – he was removed by Mitchell Johnson’s third delivery with the second new ball – batting for an hour or more, but only Kevin Pietersen, in a display of great self-denial, going on to pass a half century.

Pietersen remained unbeaten on 67, having batted for five minutes over four hours, in the process passing Geoffrey Boycott’s career tally of 8,114 runs, although in fewer matches and just possibly from fewer deliveries as well. Pietersen has batted considerably more entertainingly but never with such obvious application.

Whether Clarke’s decision to bowl first on winning the toss for the fourth time this series was a wise one only the fullness of time will tell: it is rarely a good idea to make such judgements until both sides have had the opportunity to bat. Certainly the decision was out of character, for ever since Ricky Ponting’s disastrous insertion of England at Edgbaston in 2005, the Australians have put the opposition in on only three previous occasions, one of which, against New Zealand in Hobart two years ago, they lost.

Once they had got some early first hour over-zealous profligacy out of the way, and adjusted their lengths and lines accordingly, the Australian bowling, led by the redoubtable bowling machine that is Ryan Harris, were first class. One day Harris will bowl a half-volley but hell will freeze over first. Later in the day, as the noise in the stadium crescendoed and the adrenaline flowed, Johnson bowled like the wind.

By no means was this a flawless performance from Australia. Catches were missed: one at third slip by Steve Smith, a diving effort, to reprieve Michael Carberry when he had made two of his 38 runs; and a second when Pietersen had only six, and, hooking Harris, was actually caught on the long leg boundary by Nathan Coulter-Nile, fielding as substitute for the temporarily injured Shane Watson.

Coulter-Nile then, for some unknown reason (he had plenty of room), stumbled over the boundary rope instead. A third came when Pietersen, on 41 now, pulled Harris from the front foot and George Bailey, at midwicket, failed to hold a stinging catch.

Without Pietersen, England would be hanging on by their fingernails. In fact this was probably a good toss for England to lose for although advice from local sages was to bat first, the cloudiness, warmth and humidity of the morning, as well as Australian’s dominance with the ball, persuaded Clarke otherwise. Alastair Cook says he would have batted. Certainly there was nothing like the orthodox swing that might have been anticipated, but there was some movement off the seam, while Nathan Lyon, brought on for only the 10th over, one of three bowling changes made by Clarke in that time, immediately found some first day dampish-pitch turn and bounce.

Cook and Carberry got England off to a bright start in fact, cutting and driving well, with 44 runs coming in the first hour, at which point Australia regrouped and began to turn the screw. Cook, looking more comfortable than at any time, pushed away from his body and was caught at second slip off Peter Siddle to end a 48-run opening stand and then Carberry, who had been rendered virtually strokeless by the dual determination of the bowlers to fire outside off stump and his to ignore the deliveries.

He can be attacked from round the wicket though, making his judgement less certain. And so it proved: when Carberry was on 38, Watson angled one in from round the wicket, and clipped the batsmen’s off stump as he offered no stroke. Together he and Joe Root had doubled the score, although it was the heaviest of going for Root. When Root was then caught at the wicket off Harris an hour or so after lunch, England were 106 for three and in trouble.

The debate about Ian Bell’s place in the batting order will rumble on, but now he and Pietersen added 67 for the fourth wicket. Pietersen had taken 13 balls to get off the mark, which he did by pulling Siddle firmly to midwicket, one of only three scoring shots in the first hour of his innings. But he played straight once more, eschewing the fancy trademark flicks to the onside and avoiding the baited traps.

He lost Bell for 27 when Harris returned for another spell half an hour before the second new ball, and Stokes shortly after it had been taken, although not before the young all-rounder had belted Lyon’s final over with the old ball successively for four and six.

Then Pietersen lost Jonny Bairstow too, who, as expected, had replaced Matt Prior after a run of 60 successive games, just five short of Alan Knott’s record for an England keeper. This was not an ideal time to be returning to the side, with Johnson and the new ball, and, having top edged him fortuitously for six, over the head of the keeper, he was nowhere near in line as Johnson ripped one through the Brandenburg and pegged back his off stump.