Mackie Shilstone: ‘I had to break him into pieces and put him back together again’ 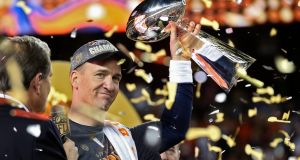 Peyton Manning had to reinvent his throwing style to give himself one last shot of winning the Super Bowl for a second time. Photograph: NYT

Peyton Manning had asked for one more season of football and Mackie Shilstone delivered. Then on Sunday night, Shilstone sat in his New Orleans home and watched Manning take that final year and win a Super Bowl.

“I had to break him into pieces and put him back together again,” Shilstone said into his phone as his television showed Manning with confetti falling all around like a golden winter squall. “I put him together and created the bionic man.”

What Shilstone, the famed trainer, who has helped revive the careers of Serena Williams and Bernard Hopkins, did with Manning was get him good enough to play a few last football games. He made the Denver Broncos quarterback healthy, giving him a plan for diet and exercise and life. He strengthened Manning’s arm and torso and legs. He gave him an idea of how his body – at 39 years old – could survive one last NFL season.

Then Manning stumbled through a final, painful season and into a Super Bowl in what will almost certainly be his last game. That he won Sunday’s Super Bowl was more a tribute to a defence that pummeled Carolina quarterback Cam Newton than his own brilliance. History will remember his Super Bowl 50 as one of the worst performances by a winning Super Bowl quarterback. But it was good – or passable – enough for the Broncos to win. And as Manning looked at the confetti, good enough was more than he could have expected from the year he won his second Super Bowl.

It was all because last February he closed his eyes and crouched on a balance beam.

This was Shilstone’s idea. The trainer believed that Manning’s 6ft 5 in frame worked against him. For years Manning had been able to use his height and his strong right arm to heave the ball over defenders. But by last winter Manning’s arm was weak – an accumulation of years of injury. In spending hours of examining Manning, watching him throw and studying his medical records, Shilstone was sure the key to the quarterback’s final revival rested in his hips.

If Manning could learn to throw with his legs and his hips rather than his arm, Shilstone believed Manning had a chance to make it through a last year and be effective enough to win.

But how could Manning do this?

The answer was in a balance beam built four inches off the ground. Shilstone told Manning to stand on the beam, bend his knees and close his eyes. Then Shilstone marked off 20 yards and told Manning to open his eyes and throw him the ball as hard as he could in two seconds without standing up. If Manning straightened his knees he would fall of the beam.

“I was Yoda and he was Luke Skywalker,” Shilstone said.

It took a month for Manning to master the idea of closing his eyes, crouching on a balance beam and throwing a football without standing up. Shilstone left Manning to practice and Manning – who craves routine – practiced the throws over and over until he got them right.

“I gave him a solution,” Shilstone says with a laugh. “I didn’t sit with him. Yoda didn’t have time for Luke Skywalker.”

The Manning that emerged from Shilstone’s laboratory was not agile. He might have been in the best shape of his life – something his longtime throwing mentor David Cutcliffe said upon seeing Manning last spring – but he was not nearly as graceful as he had been in other years when throwing seemed effortless. The Bionic Peyton heaved passes rather than tossed them. He bent his legs and pushed the ball in the air. He was more Frankenstein than Steve Austin, but the goal wasn’t beauty – just surviving enough to make one last Super Bowl.

Long after the confetti had fallen, the Broncos had left the field and the team had packed their new silver trophy, Manning walked slowly into the locker room. He wore a gray Super Bowl champions T-shirt over his uniform and he smiled wearily as he stopped in the middle of a room packed with so many people he didn’t even know.

People crowded around him, shoving phones in his face. Some were sportswriters, others appeared of more dubious connection to a professional task, more eager to be seen around the quarterback than of journalistic purpose. One bumped into several people as he tried to angle himself for a selfie with Manning in the background.

“Gritty, tough, resilient, unselfish, that’s how we have been this year,” Manning said, oblivious to the selfie taker. “And that’s how I’ve been with some of the things I’ve been through this year.”

Plantar fasciitis rendered him so ineffective on the day he set the NFL record for passing yards that he was eventually benched and missed a third of the season. He wobbled through the playoffs and didn’t look much like the Manning of old in the Super Bowl. He also faced allegations – which he strongly denied – that his recovery from neck surgery in 2011 came with the aid of HGH.

But his stumble to the end led to one of the finest finishes a great quarterback has ever had. Much like John Elway, the Broncos president who convinced him to come to Denver in 2012, Manning will have walked away with a championship on his final game.

He said he didn’t want to announce his retirement as the team celebrated their first championship since 1999 because doing so would take away from the group of players he has come to appreciate. On Saturday, the night before, the game he gave a long rambling talk to them in which he remembered all the things that had happened to them this season. Good and bad.

Then Sunday night they won together. And so he decided they would leave the stadium together. His retirement – if it is to come this winter – will have to wait.

That morning Shilstone had sent him passages from The Art of War, a 1,500 year old guide to battle written by the Chinese general Sun Tzu. Shilstone hoped the passages would inspire Manning, making him believe he had that one last game inside him. Presumably they had nothing to do with standing on a balance beam and throwing footballs while keeping eyes closed.

“Hey, could you do me a favor,” Shilstone said over the phone. “If you see Peyton tell him Sun Tzu is proud of him. He will understand.”

But in the mayhem of the Broncos locker room, perhaps his final postgame locker room as a player, Manning was too busy wading through the throngs of people with phones to hear congratulations from half a world and 15 centuries away.

1 Leinster look ready to step things up and burn off Saracens challenge
2 Born to ride, born to win: Sam Bennett, the making of a green machine
3 Will Connors now delivering on his massive potential
4 Keith Duggan: Surreal story of John Delaney needs to act as a wake-up call for FAI
5 Lance Armstrong’s latest move serving him well on many fronts
Real news has value SUBSCRIBE

Leinster look ready to step things up and burn off Saracens challenge 06:00
Misfiring Ulster facing a torrid time in Toulouse 06:00
Etneya win at Gowran would prove a fitting tribute to Smullen 06:00
O’Sheas and Breaffy looking to take final step to a first Mayo senior title 06:00
Paul Galvin’s Wexford departure takes a little of the shine off things 06:00
Here is your handy guide to sport on television this week