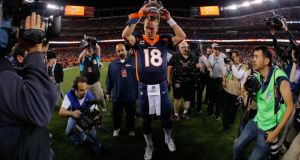 Denver Broncos quarterback Peyton Manning is surrounded by the media after a game against the San Francisco 49ers in which he broke the all-time NFL record with 509 career touchdowns. Photograph: t Doug Pensinger/Getty Images

Peyton Manning paid tribute to team-mates past and present after breaking Brett Favre’s NFL record for most career touchdown passes.

Manning was in a typically humble mood after the match, thanking his team-mates and insisting that the Broncos’ victory was more important than his personal milestone.

“I have great appreciation for all the players in the NFL playing now and who have played before us but especially at the quarterback position,” he told a pre-game press conference.

“I am very humbled and very honoured. I certainly think about how grateful I am for all the team-mates and coaches that I have played with or played for throughout my career, not only in Denver, in Indianapolis, and all the people who have helped me along the way.

“I’ve always been a fan of quarterbacks, whether it’s Brett Favre, or Dan Marino, or John Elway, so I’m very honoured and humbled to join a pretty unique club and when you throw in guys like Johnny Unitas and Fran Tarkenton — guys that were my dad’s heroes growing up as well — I can put it in some perspective and have a great appreciation for it.”

Manning added: “It was a great win tonight first and foremost. I thought our whole team played really well and I was really excited about offensively the way we executed the game plan.

“The guys up front did a good job and I thought we ran the ball well. It opened up a lot of things in the passing game, a couple of the touchdowns were all play-action and defensively getting us the ball back with great field position.

“It was a special night I think certainly more special because of the way the team played and because we got the win with such a team effort. It’s definitely one I’ll always remember.”

Broncos head coach John Fox was quick to wax lyrical about Manning’s latest achievement but, like his all-conquering quarterback, he insisted that the result was of most importance.

He said: “There’s no doubt that we feel blessed — the Bronco organisation, myself personally, our coaching staff — he’s a tremendous player, the record he has set speaks for itself.

“It’s neat to be part of it no doubt but we’re here to win football games and I know Peyton will say the same thing. I’ve competed against him for a lot of years so it’s way better to have him on our side.”

Favre later took to social media to congratulate Manning for breaking his record, tweeting: “Well deserved Peyton. Congratulations on breaking my record. #Onto600.”

Elsewhere in the NFL, the St Louis Rams beat defending Super Bowl champions Seattle Seahawks 28-26, the Detroit Lions came back to defeat the New Orleans Saints 24-23, the Baltimore Ravens secured a 29-7 victory over the Atlanta Falcons and the Indianapolis Colts hammered the Cincinnati Bengals 27-0.

Peyton’s brother Eli had three touchdown passes but the New York Giants still lost 31-21 to the Dallas Cowboys, the Buffalo Bills edged to a 17-16 win over the Minnesota Vikings, while the Washington Redskins secured a slender 19-17 victory over the Tennessee Titans.

There were also wins for the Jacksonville Jaguars, Green Bay Packers, Miami Dolphins, Kansas City Chiefs and the Arizona Cardinals.