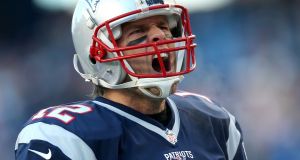 Tom Brady of the Patriots has thrown over 4,000 yards this season. Photograph: Jim Rogash/Getty Images.

A spot in Super Bowl 50 will be on the line when the New England Patriots visit the Denver Broncos, but the stage will belong to Tom Brady-Peyton Manning XVII.

For a decade NFL fans have debated who is better, Brady or Manning, and Sunday’s outcome is not likely end that discussion.

The AFC conference championship will mark the 17th, and perhaps final, time the two future Hall of Famers will clash on the American gridiron and since the match-up was set the focus has not strayed from the quarterbacking giants.

Both Brady (38) and Manning, a creaking 39-year-old, may be on the downward slope of brilliant careers but the rivalry, hyped to the extreme, still holds an undeniable allure.

Manning owns the records for passing yards and touchdowns and a trophy case packed with a five NFL most valuable player awards but is an underwhelming 12-13 in postseason play and hoisted the Vince Lombardi trophy just once in three Super Bowls.

When it comes to individual accolades Brady cannot match Manning’s resume but with a win Sunday will be chasing a fifth Super Bowl ring to go along with three Super Bowl MVP awards.

Playing with a chip on his shoulder after last season’s “Deflategate” scandal over the use of under-inflated footballs tarnished the Patriots’ Super Bowl celebrations, Brady has performed like a man with something to prove.

Brady threw for more than 4,000 yards for the fifth straight season and led the NFL in touchdown tosses with 36.

Manning in comparison has had a forgettable campaign, missing six games with a plantar fascia injury that has raised questions about his playing future.

The rivalry has taken on the aura of a heavyweight title fight, even though the two men are never in the ring at the same time and have both made it clear it is the Patriots against the Broncos, not Manning v Brady.

These are two organisations that know better than most what it takes to get to the Super Bowl, the Patriots looking to make a record ninth trip to the championship game while the Broncos are bidding for a record-tying eighth.

After a regular season that saw Brady work his magic with a patchwork offensive lineup, his arsenal will be back near full strength.

Julian Edelman returned last week for the playoff game against Kansas City after sitting out two months with a foot injury and caught 10 passes for 100 yards, while tight end Rob Gronkowski, who has scored in his last four playoff games, remains a frightening force.

In one season the Broncos have been transformed from a team that scored at will with a high-powered attack to one that relies on a defence led by DeMarcus Ware and Von Miller that topped the league in sacks with 52 and were the NFL’s best pass defence.

Meanwhile, Carolina Panthers quarterback Cam Newton, who likes to strike a Superman pose after his gridiron feats, will test his powers against the visiting Arizona Cardinals with a Super Bowl berth on the line.

Newton, a dual threat with a bazooka arm and bruising running skills, led Carolina to an NFL-best 15-1 mark in the regular season and is considered the favourite for league MVP honours.

The slightly-favoured Panthers were 8-0 at home this season, but the undaunted Cardinals were 7-1 on the road and eager to avenge last year’s playoff loss to Carolina when Palmer was sidelined.

Unlike the AFC showdown between teams full of championship experience, the NFC clash will advance a team gunning for their first Super Bowl triumph. Both the Panthers (in 2003) and Cardinals (2008) have been there once before and lost narrowly.

1 TV View: Roy Keane but Daragh’s keener as Late Late fails to shoot the lights out
2 Ireland Slam England at the Gardens to open up Grand ambitions
3 Six Nations: Ireland v England all you need to know guide
4 ‘Manchester United are lucky to have you’: Klopp responds to Donegal schoolboy’s letter
5 Iain Henderson ruled out of Ireland’s Twickenham visit
Real news has value SUBSCRIBE