International Boxing Association confirm male boxers will be seeded at the European Games in Baku, Azerbaijan 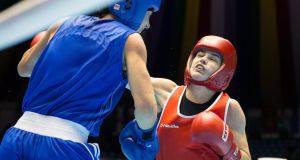 Pete Taylor, coach and dad to Olympic champion Katie Taylor, has described the decision to not seed female boxers at next month’s inaugural European Games as disappoin ting.

The International Boxing Association (AIBA) have confirmed that male boxers will be seeded at the European Games in Baku, Azerbaijan, but not women.

Taylor could now meet Sofya Ochigava, if she is named in the Russian squad, in the preliminaries in Baku in a repeat of the 2012 Olympic final.

“Katie has been ranked number one in the world for the last nine years, but what is the point of having world rankings if there is no seeding. It’s disappointing,” said Pete Taylor.

Taylor junior and her fellow London 2012 Olympians Darren O’Neill and Adam Nolan haven been named in a 12-strong Irish boxing squad for the European Games.

If Taylor wins any class of a medal in Baku she will pick up enough rankings points to go into 2016 ranked number one in the World for an unprecedented 10th successive year.

The first Olympic qualifier for female boxers will be at the AIBA World Elite Championships in Kazakhstan next February.

If Joyce wins the eight-rounder his next APB bout will be for a place at the 2016 Olympics. Joe Ward meets French light-heavy Mathieu Bauderlique in APB on June 5 two wins from qualifying for Rio 2016.

The host city for the Ward versus Bauderlique fight has yet to be confirmed. It is understood that a Bulgarian city is under consideration.

1 Getting behind the rotten core of rugby with Dan Tuohy
2 Football fan survey: Almost half of Irish adults say they support a club
3 Irish squad in the dark as clouds hang over Six Nations
4 Football fan survey: Manchester United still top the league among Irish fans
5 Larry McCarthy to become first overseas president of the GAA
Real news has value SUBSCRIBE