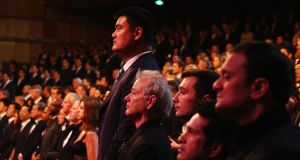 beat Cristiano Ronaldo and Lewis Hamilton to be named sportsman of the year at the Laureus Sports Awards in Shanghai, the first time the award has been handed out in China.

Ethiopian athlete Genzebe Dibaba was named sportswoman of the year, while Germany’s World Cup-winning international squad won the team of the year prize.

The event was held in the Grand Theatre in the financial district, and attracted many of the country’s top sport stars.

British actor Benedict Cumberbatch, on his first trip to China, managed to get most of the Chinese names right, no easy feat, and even managed to get some jokes in, praising legendary swimmer Mark Spitz’s “incredible stars-and-stripes Speedos, I mean, moustache, I mean, seven gold medals”.

The most popular award on the night went to a heavily pregnant Li Na, the tennis star who took the exceptional achievement gong and who arrived at the venue in the Mercedes F015 concept car.

“We were good ambassadors for Germany – finally the ugly Germans played in a sympathetic way,” said Bierhoff.

Coach Joachim Loew, in a statement sent to the event, said: “There were one or two very difficult matches in which we really had to fight hard to win and then above all there was the historical 7-1 against Brazil, followed by a magical night in Rio, at the Maracana. When the final whistle blew it was something of a release for me, with a feeling of great satisfaction.”

Tatyana McFadden won the disability award. The wheelchair racer has just won the marathon grand slam of London, Boston, Chicago and New York, and also won a silver medal at the Winter Paralympics.

Comeback of the year went to Springboks flanker Schalk Burger, who overcame life-threatening illnesses to represent his country, while Olympic gold winner Liu Xiang sang a remarkably capable duet with Liu Changyong, suggesting that the freshly retired hurdler has another career in the entertainment business.

Yao Ming took the Laureus Spirit of Sport award, towering over Ed Moses as the former hurdling great handed over the trophy.

“Sport is about persistence and commitment. I’m happy that Li Na and Liu Xiang are joining me in remaining committed to sports,” said Yao.