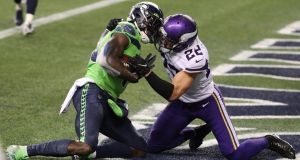 DK Metcalf of the Seattle Seahawks catches the game-winning touchdown pass against Harrison Smith of the Minnesota Vikings during the fourth quarter of the NFL game at CenturyLink Field in Seattle, Washington. Photograph: Abbie Parr/Getty Images

Derek Carr threw for 347 yards and three touchdowns, outplaying Super Bowl MVP Patrick Mahomes along the way, and the Las Vegas Raiders nearly shut out the potent Kansas City offence in the second half to rally for a 40-32 victory on Sunday that ended the Chiefs’ franchise-record 13-game winning streak.

Josh Jacobs scored the go-ahead touchdown in the fourth quarter, Daniel Carlson added a field goal a few minutes later, and Mahomes was intercepted on fourth down to set up another touchdown by Jacobs that make it 40-24 with 5:26 left.

The Chiefs had won seven in a row over their long-time rival at Arrowhead Stadium, where Carr had been especially bad in losing each of his six starts. But he was simply spectacular with a relatively quiet 17,000 fans in attendance, helping to guide the Raiders to their first win in Kansas City since October 2012.

Mahomes spent the entire game trying to escape the Las Vegas pass rush, which manhandled the Chiefs offensive line, and finished with 340 yards passing and two touchdowns along with an interception. Travis Kelce had 108 yards receiving.

Russell Wilson capped a 94-yard drive with a six-yard touchdown pass to DK Metcalf on fourth-and-goal with 15 seconds left, and the Seattle Seahawks beat the Minnesota Vikings 27-26.

Seattle improved to 5-0 for the first time in franchise history with Wilson providing some more prime-time magic and yet another late comeback. Wilson finished 20 of 32 for 217 yards and three touchdowns. It wasn’t his best performance but he made the key throws late when it was needed.

Dak Prescott sustained a gruesome ankle injury not long after his first career touchdown catch before back-up Andy Dalton led a drive to a field goal on the final play as the Dallas Cowboys beat the winless New York Giants 37-34.

Michael Gallup made two spectacular sideline catches on throws from Dalton, the second a 38-yarder to the New York 16. The Cowboys ran the clock down to three seconds, and Greg Zuerlein had his second game-ending kick of the season, from 34 yards. Prescott was going down in the arms of defensive back Logan Ryan at the end of a run in the third quarter when the Dallas quarterback’s lower right leg got caught under Ryan and appeared to snap.

Claypool, a second-round pick from Notre Dame, raced down the slot, hauled in a dart from Ben Roethlisberger and went the rest of the 35 yards to the end zone as the Steelers improved to 4-0 for the first time since 1979. – Guardian