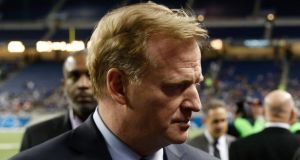 “With considerable assistance from the many people and organisations we consulted, NFL ownership has endorsed an enhanced policy that is significantly more robust, thorough, and formal,” NFL Commissioner Roger Goodell said.

The NFL has come under fire over the last six months as it struggled with a personal conduct policy widely seen as too lenient. With big NFL sponsors watching closely, Mr Goodell embarked on a mission to strengthen the policy.

High profile players Adrian Peterson, Ray Rice and Greg Hardy have been convicted of domestic abuse over the past few months and the NFL has stumbled in some of its attempts to punish the players.

A special council for investigations and conduct will “decide the discipline for violations” of the new policy, according to Mr Goodell, who will still hear appeals but may appoint an independent panel to assist him.

“The policy is comprehensive. It is strong. It is tough. And it is better for everyone associated with the NFL,” Mr Goodell said.

The NFL Players Association was not happy it was not involved in formulating the new policy.

“Our union has not been offered the professional courtesy of seeing the NFL’s new personal conduct policy before it hit the presses,” the union said in a statement. “Their unilateral decision and conduct today is the only thing that has been consistent over the past few months.”

Among the changes are a “more extensive” list of prohibited conduct as well as NFL funded counselling and services for victims and their families.

The new policy was unveiled at an owners meeting in Irving, Texas.

Arizona Cardinals owner Michael Bidwill will serve as chairman of a nine owner committee that will oversee the new policy. Two former players with ownership stakes will serve on the committee, Warrick Dunn of the Atlanta Falcons and the Pittsburgh Steelers’ John Stallworth.

After criticism over the summer, Mr Goodell retained four women, including Lisa Friel, the former head of the Manhattan district attorney’s sexual crimes unit, to shape the NFL’s policies relating to domestic violence and sexual assault.

“We now have a layered evaluation process to take into account a diversity of expert views,” Mr Goodell said.