Felix English is best of the Ireland squad in Canada, coming fourth in the scratch race 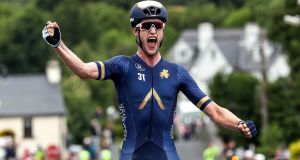 Having been left without a slot for 2019 when the Aqua Blue Sport team collapsed at the end of August, national road race champion Conor Dunne has been thrust into the position of finding a squad for next season.

The 26-year-old confirmed to The Irish Times on Thursday that he still does not have a ride secured. However, he said that he was hoping that there would be developments soon.

At 6ft 9in Dunne is the tallest rider in professional cycling. He has made a name as an aggressive competitor who often goes in long distance breakaways. This has both earned vital publicity for his teams and also taken the pressure off them in forcing others to chase. His attacking style paid off with a very impressive win in the national championships in July, and also yielded second overall in the king of the mountains competition in the Tour of Dunkirk in May.

Meanwhile, with morale boosted after some strong performances in last weekend’s World Cup in Milton, Ontario, Canada, Irish track cyclists are building towards their next big appointment.

The third round of the World Cup will take place in Berlin, Germany, between November 30th and December 2nd. This will be followed by round four in London two weeks after that, then the concluding leg of the series in Cambridge, New Zealand, at the end of January.

Felix English was best of the squad in last week’s Canadian race, netting fourth in the scratch race on Friday. In fact, he looked set for a bronze medal as the Greek rider Christos Volikakis was disqualified from third place. However, he was later reinstated, bumping English back down to fourth.

Although a top three finish would have been a huge boost for English, he said he was satisfied with the result.

“I was really happy there. I’ve been ill for the past week. I was really, really struggling to breathe after the World Cup in France. It’s never nice to miss out on a medal like that, but it was nice to get over that and race well there. I was feeling myself again.”

English’s best World Cup performance was the Madison win he clocked up with Mark Downey in February 2017.

After his fourth place the next best results from the Irish last weekend were posted by Lydia Boylan. She and Lydia Gurley were 10th in the women’s Madison last Saturday, then she went on to win the tempo race round. While the events in the multi-discipline Omnium didn’t go as she hoped, she said that her 10th overall gave her encouragement for the future.

“I feel like I’m close to cracking it,” she said. “I tried something a little different, but it didn’t work out. In the points [points race] I tried to go for a lap, but it wasn’t to be there either.

“That’s my first Omnium of this World Cup, and it’s a good start. I just need to get it together, then I can be challenging for the medals.”