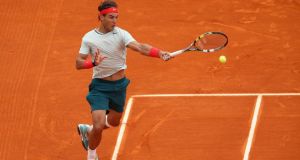 Nadal, who made an unusual number of errors and looked uncomfortable throughout against his 21-year-old opponent, slowly ground him down and fired an ace to clinch his 45th successive victory at the first big claycourt event of the season.

The Spaniard now has a 47-1 win-loss record at the glamorous venue and will next face Frenchman Jo-Wilfried Tsonga, who beat Swiss Stanislas Wawrinka 2-6 6-3 6-4 on the picturesque Centre Court to reach the last four for the first time.

World number one Novak Djokovic was not bothered by his sprained ankle as he moved past Finland’s Jarkko Nieminen 6-4 6-3 to clinch a meeting with Fabio Fognini. The 32nd-ranked Italian made his first significant breakthrough in a Masters Series event by stunning seventh seed Richard Gasquet 7-6 6-2.

The straight-laced crowd, for once reluctant to support Nadal with Dimitrov threatening to pull off a shock win, stood up to cheer the 34th-ranked Bulgarian as he left the court after a thrilling performance.

Nadal had his share of applause after keeping his bid for a ninth consecutive crown alive by the Mediterranean, where he is coming back from a month-long break after winning three titles including the Indian Wells Masters following seven months out with injury.

“I had a fantastic first set and that’s important. That means my level is here,” Nadal told a news conference. “I am losing a bit of intensity at some moments. That’s normal after a long time out of competition,” added the Spaniard.

Tsonga had opened the chilly grey day, with the sun hidden by the clouds and a cool breeze refreshing the sparse crowd, by winning a fierce battle against Wawrinka. Both players started brightly, with a solid Wawrinka looking on course to repeat the superb third-round performance which knocked out world number two Andy Murray.

However, Tsonga’s aggression paid off with the Swiss-based Frenchman making the most of his break chances to overcome his occasional training partner.

Tsonga, who had not reached the last four in a Masters series event since his 2011 home triumph at the Paris Open, saw himself as the underdog ahead of the semi-final with Nadal.

“It’s a incredible challenge. If I win, I’ll be a hero. If I lose, I’ll just go back home like everybody else,” he said.

Italian Fognini, who lives just across the border and said he felt “at home” in Monaco, produced a fine performance with his dropshots and deep spinning forehands troubling France’s Gasquet.

The stands started to empty after he secured his victory and he will need his status as a fans’ favourite when he faces Djokovic, who moved far better on the clay than he did in the first two rounds when he had to recover from a set down.

Last year’s runner-up Djokovic, who picked up a ankle injury while on Davis Cup duty with Serbia less than two weeks ago, was pleased by his physical improvement.

“It’s a great step forward for me," he said. “I did not have the feeling that the ankle was bothering me, I was very solid. I elevated the level of my game in the past two matches, definitely,” he added while a rainbow shone in the light rain falling over Centre Court.