Ferrer no match for his fellow Spaniard at Roland Garros 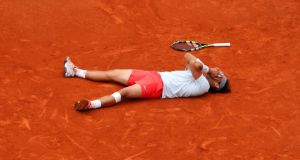 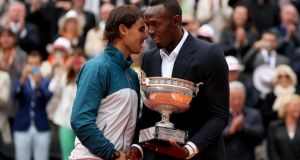 Rafael Nadal is presented with the Coupe des Mousquetaires trophy by Usian Bolt after the men’s singles final against David Ferrer at the French Open at Roland Garros in Paris. Photograph: Matthew Stockman/Getty Images

Rafael Nadal became the first man ever to win eight singles titles at a single Grand Slam with a straight-sets win over Spanish compatriot David Ferrer at the French Open.

The third seed dominated the match to win 6-3 6-2 6-3 in two hours and 16 minutes, making it seven titles from nine tournaments since his return from seven months out with a knee injury in February.

Nadal has now won 12 Grand Slam titles and 59 matches from 60 at Roland Garros, more than any other male player.

The final was dramatically interrupted in the second set by a masked protester carrying a flare who jumped onto Court Philippe Chatrier but was quickly tackled by security staff.

Nadal, who will drop behind Ferrer to number five in the world despite his victory, was presented with the Coupe des Mousquetaires by sprint king Usain Bolt.